Disclaimer: This suggestion wasn't made by me, I'm posting it on behalf of a friend!

Don’t you all find it odd how the near-haradrim (or the “near-southrons”) praise serpents to the point of having them inserted on their banners? What could it represent? That serpents are religiously venerated? That the Near-Haradrim consider themselves to be as agile, cunning, and lethal as snakes? Nonetheless it may be safe to assume they have came in contact with those reptiles, otherwise it would be impossible to portray them anywhere.

My suggestion is to extend Near-Harad’s Lore via their relation to their snakes (I’d leave the RP part to the Lore Group of the Wikia since my priority is to have this actually in the mod).

Also known as cobras, snakes –whatever. Those little venomous animals would have over 15HP (but no armour resistance), and inject a special poison to the victim who received a bite (Poison + a Nausea, since being bite by a poisonous snake should seriously make you feel extremely ill).

Their AI would also be quite diferente: they’d only attack when provoked (when you get really close or hit them). Once engaged in combat the serpents would slide arround their target in a circle, readying for lunging at them with their fangs.

Serpents would drop their scales, aside from their fangs each would still have some poison that could be extracted and utilized. Another way to get the poison would be “milking” them like Scorpions and Spiders.

2- Valley Of The Serpents

This biome would be located inside a complex of mesa hills (like the vanilla MC’s biome), where several serpents could be found in abundance. Legend has it that certain Haradrim Warriors travel there to prove themselves worthy..

I know that NH will eventually be able to ride Mumakil but... they are not the only ones. The Tauredain technically seem to be the ones who truly “own” those beasts, therefore Near-Harad needs something unique to form an elite corps.

Foremost I had always been bothered by how this supposedly “Might Of The South” could easily be beaten by other of Harad’s factions, the Half-Trolls (their homeland biome is vast and albeit they are taken as rudimentar, their crafts actually rival NH’s in weaponry and armour – but once more, the half-trolls are MUCH stronger physically). The Half Trolls would ransack Near-Harad, and perhaps could even ride oliphants themselves!

So my idea is to have this elite unit be the equivalent of the Golden Easterlings. The Serpent Warriors would have 25HP (HP typically given by enhanced men without any ties with elves), Iron Level armour (crafted by Steel, which craft recipe was learned/stolen by the Haradrim when the Númenóreans settled at Umbar) and a special weapon: The Poisoned Scimitar.

Steel would be the new ingot introduced to the mod, simply crafted by mixing coal and iron in an alloy forge. For once perhaps the armors of Gondor could be made out of this metal instead of the old vanilla iron.

In short it’d be the blade of the serpent warriors crafted with via the introduction of the serpent poison to either the standard Haradrim Scimitar, or a Haradrim scimitar made out of steel. It’d inflict Poison (perhaps a few tickets less than that of the poisoned daggers) and Nausea (just about enough tickets to make the enemy player to loose a bit of his own balance, but nothing Strong and long lasting).

The Haradrim thanks to their long story and contact with the serpents and scorpions should’ve by now mastared some form of medicine (maybe the use of specific herbs) to prevent the effects of poison from being harmful (or at least from being terminal). Hence why I suggest the addition of a Haradrim Brew or Item that can give one Immunity to Poison temporaly, but utterly I was unsure what item would properly fit.

Craft with Steel on the Haradrim Crafting Table, it’d be as Strong as Iron. It’d have a dark colour ressembling past Haradrim armour textures, and would be addorned by dark red pieces of cloth, with the helmet ressembling the standard armour set’s.

Note 1: The Nausea effect of the serpent poison could simply not be, instead all those NPCs and Items would deal only the standard poison effect. 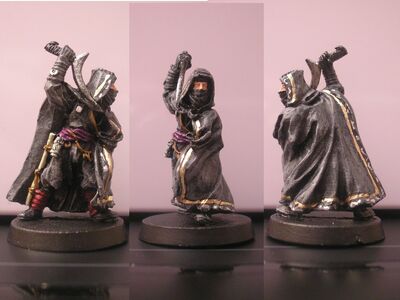 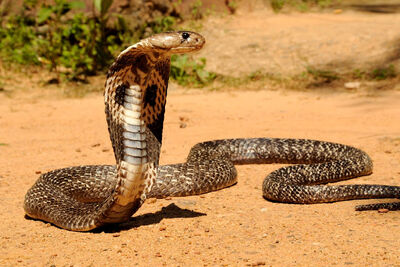 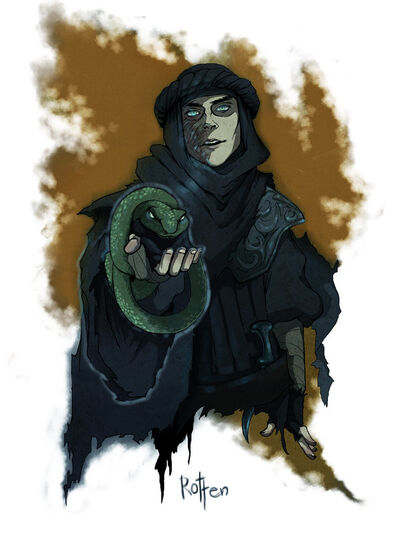 Celebrimbor, the logic is not against poisoned swords, it's that they won't be a special thing. You are ignoring the fact that Orcs also used poisoned scimitars, so it won't be a unique feature...

Darkrai, that doesn't mean we should make them an Arabic state. They are a unique nation and don't need to be made into the next Persia.

Dolgukhor wrote: They were never really the same nation tbh

(edited by MrHobit1234)
0
Gen. Grievous1138 wrote:
Geography? The geography is a desert. Snakes make more sense than horses. If anyone an milk their fangs, NH likely can.

You can't ride snakes. Horses are the main means of transport for most military in semi-desert based nations on earth anyway. And note that desert is not a place to live in, but to travel through, form one wadi ot oasis to another. You don't do that walking, but on a mount.

Using a serpent / snake in ones symbols doesn't necessarily mean they had the skills to milk the snakes that lived in their environment. Think black mamba or king cobra like beasts. They're just too big to catch alive and keep under control for milking.

Just for balance and uniqueness I'd choose for a cavalry unit for NH and snake venom milkers for Harûndor. Addition of extremely fast moving large snakes to the semi-desert of NH would be nice though.

Smaller snakes like vipers and normal cobras were at the basis of poison arrow and blade using tribes on earth. Yet, we all know Middle-earth ain't earth, ofc.

We can agree to disagree about logic and preferences. :P

(edited by AlteOgre)
1
AlteOgre wrote:
Gen. Grievous1138 wrote:
Geography? The geography is a desert. Snakes make more sense than horses. If anyone an milk their fangs, NH likely can.

Using a serpent / snake in ones symbols doesn't necessarily mean they had the skills to milk the snakes that lived in their environment. Think black mamba or king cobra like beasts. They're just too big to catch alive and keep under control for milking.

That is sound reasoning, but who can capture and milk a giant scorpion?  The same goes for Mirkwood Spiders.

Right, you shouldn't be able to. Avoid too strong diversions please.

Sorry.  I wasn't trying to divert, just make a point.

As @AlteOgre said, it is extremely unlikely for near anyone (except the Crocodile Hunter RIP) in that time period to have developed a stable way to milk the fangs of extremely large and venomous snakes. What could have happened on the contrary, is the decapitation of the dead snakes then using the fangs off a snake already dead to milk the venom. This could easily be added along with the snakes, simply having them drop heads occasionally. From there, you could craft the head with a bottle. This could give you a venomous poison bottle, so it would differ from the other poisons.

The Serpents dont need to be taken alive, the soldiers chosen to become serpent Warriors could perhaps pass through a trial involving slaying a serpent and poisoning their own blades.

Gameplay wise this whole suggestion may be MUCH more interesting, aside from that Near Harad does not need a FOURTH Cavalry Unir (Horses, Canels, Mumak Riders and An Elite Cavalry).

(edited by A Fandom user)
1
Quote:

Gameplay wise this whole suggestion may be MUCH more interesting, aside from that Near Harad does not need a FOURTH Cavalry Unir (Horses, Canels, Mumak Riders and An Elite Cavalry).

Gameplay wise NH doesn't need any additional unique unit before they get Mumakil and their riders, and other factions get more distinct unique units.

Gameplay wise the addition of special / unique units to any faction doesn't matter in any way as anyone with sufficient alignment can hire and craft all elite units (s)he wishes to use. As long as there is no mechanistic cap, adding more higher tier units and gear simply has a stacking effect, and doesn't effectively contribute to more diversity. Think the size of a standing army a player can maintain, and/or the hiring requirements players face when wanting to hire a unit (maybe even think of: elite units will only offer their services to a player if the alignment the player has with their faction is the highest the player has with any faction, or at least the second highest), and/or minimum levels of alignment for many more crafting recipes on faction CTs.
Just thinking out loud here, while diverting again, sorry.

You can't edit their HealthPoints, and albeit changes in the equipament may contribute for stronger units, they are not that effective alone, nor perhaps are they more benefitial than the NPCs' health.