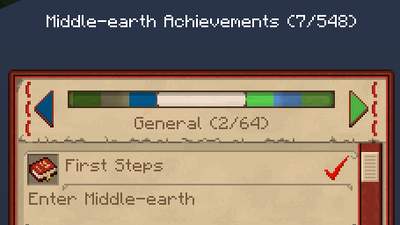 There are a great many things to see and do in Middle-earth on your adventures. Along with all the new features of the Mod comes a new, more organized, and more stable achievement system to better record your many accomplishments. To access the achievement list, open the Middle-earth menu by...

I was just thinking, once the Mod has updated to the latest Minecraft version, (wherein goats are now a mob) would some sort of achievment relating to the Three Billy Goats Gruff story be added? How would it work? Obviously it would be difficult (of not downright impossible) to code it so that leading three goats over some form of bridge with a troll under it would gain you the achievment (not to mention actually doing such in-game would be even more difficult I presume).

This is not a suggestion, but rather a discussion. I'd be interested to hear others thoughts on the matter, as well as other potential Renewed achievment ideas (which is why I've posted on General of course).

UpdatesLord of the Rings ModFactionsWoodland Realm (Biome)AchievementsWoodland Realm (Faction)Lord of the Rings Mod RenewedUpdates/RenewedLong Marshes
The Mounstains of Harad are a completley different biome to the rest in Far Harad but they don't have any achievment so something like "Horns of the South" or "The Walls of Harad" would fit. That's all.
(edited by TheRealThr33Way)
Far HaradHarad MountainsAchievements

Version 35.1. Although I am male, I selected "Feminine Rank Ovverride: ON" in the options.

The achievement for +3000 blue mountains alignment was displayed as "Blue Dwarven Lord" in the achievements menu. It was also announced in the chat like this. Only the alignment meter displays "Blue Mountains Lady".

This was first reported by Notverygoodusername here.

Just a small oversight when Pelargir tridents were introduced into the game.

I was messing around with achievements and am somehow unhappy, with how it works since Public Beta 32. I did all my tests with /alignmentZones disable and friendly fire = on (attacking allies possible) so that nothing interferes.

I think, this change is responsible for the strage behaviour:

I realized, that "slayer" achievements are suppressed in the list if the alignment is 0 or above. But it's always possible to get it:

In my eyes, the "slayer" achievements should always be shown and notified, as they can be obtained via setting "friendly fire" to "on", independently of the alignment.

Also, all once obtained alignments should be shown in the list, even if you couldn't obtain them any longer due to your current alignment (e.g. the use of a certain crafting table).

Just something very small but very useful: Please add a "ALL" option to the

When checking something out in creative, or when setting up a server it's very useful to be able just to reset all of your achievements at once instead of typing in all the long names.