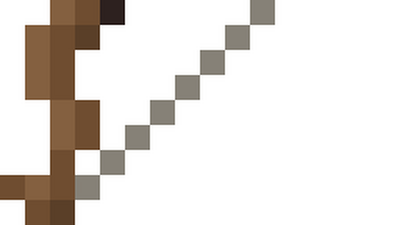 There are a lot of different bows in Middle-earth (see list below). The bows behave just like the vanilla Minecraft bow, but with varying loading speed, power, enchantability, and durability. Often, certain mobs in this Mod will be equipped with a type of bow as their weapon. These mobs include...

I would like to propose a petition here to improve AIM for elves.

Or adding a special class of warriors for the elves.

The point is that the elves, and I notice this mainly in the older version, but even now in the new version it has not improved much. That the elves focus on one enemy and they don't care what happens around them. This problem is mainly about their multifunctionality, which allows them to "hit" enemies at a distance with a bow or fight with a sword at close range.

And so I would give them my special class of warriors as with other nations. Or just added AIM.

I know it's a bit of a tradition because elves have been multifunctional from the beginning. In any case, it puts the elves at a disadvantage on the servers. And it favors, for example, dwarves whose main melee weapons are hammers and axes with an average DMG of 9.

Thank you for your attention.

I hope you do something about this.

So, I know the bows were changed so that they were more even and fair. That is a good idea but the way they are right now is kind of ridiculous. First off, Ranger bows are the same as a vanilla bow, which makes no sense. Literally rohirric bows are better, and they shouldn't because first off the Rangers main weapon is a bow and second off the bow is a big part of the Rangers pvp. Secondly, some factions like Mordor and Gondor are kind of unbalanced more now because Gondor had better archers, now they really don't. When comparing Gondor archers V Mordor archers before this update you can see Gondor had better bows so they were better archers. The bows weren't overpowered or anything or weren't better greatly, they were just better because they had better range. So, to kind of end this rant I'm just gonna give a list of what bows in my opinion should be changed and why.

Ranger Bows: The ranger bows right now are basic vanilla bows. 100% in every category, making them one of the worst in the game. Like I stated early the Ranger faction is kind of thought of as being archers, and now that their bows are completely garbage, the Ranger faction just kind of sucks now. I suggest changing their ranger to 125%, because it would give them good range. They shouldn't have any increased damage or speed, but having max range would make the most sense.

Gondor Bows: The Gondorians had really good bows in lore, and also the Gondorian Archers were better than orc archers. With this update, Orc Archers and Gonodiran archers are pretty much the same now, which doesn't make any sense. My suggestion is to make the range 120%, just to give them a bit more range, so the only difference between Orc and Gondor archers would be that the Gondorians would have more range.

Rohirric Bows: Ultimately, I think rohirric bows should be a bit faster than most bows, because they are short bows used mainly by horseriders. I think that 110% for rohirric bows would be an ideal percentage as it is faster but not too fast.

Of course, to keep it fair, it shouldn't only be good factions that get buffs.

Rhunic Bows: They should probably have a bit more range, just to keep things more fair. On top of this, one of their main Enemies is Dale, so giving them a bit more range would allow them to compete a bit more. Giving Rhunic bows 110% Range would be a good number in my opinion.

Orc bows should be the same because they aren't really meant to be good.

Gundabad Uruks Bows: A little more speed would alow them to compete a bit more with their enemies ultimately. Making their speed 80% would be a fair number instead of 67%.

Thanks for reading, and would love to hear back from anyone who has anything else to add on or would just like to talk about this topic.

I think you need to increase your view range and fire from an npc. They can't see very well, and you have to get close enough for them to act. For example: the Pathfinder can not even shoot from the tower because he sees nothing.
I stationed my archers in the fortress, but it was of no use!((

If you're defending Gondor/Mordor/Rhudel wouldn't you bring more than just three or four arrows?

My suggestion is simple - archer NPCs drop 8-12 arrows instead of just 1-4.

It's me again with another great pair of suggestions! I can't lie, I am really into the fighting aspect of this mod and as an evil player, I couldn't help but notice something. Evil bows are pretty darn bad! They've got very long drawback times and deal little but no more damage than their good-aligned opponents. So that's why I came up with something.

I introduce to you, The Uruk-Hai Scouts!

The Uruk-Hai had fast scouts wielding shortbows. This is not only a nice addition to the Uruk-Hai because of the new unit, but it also adds another bow to the game. The shortbow would have a short drawback, seen that it's a shortbow. It would do decent damage but lack range. Regarding the units, they could be a little faster than other Uruk-Hai units, but have thinner armour.

Second, increase the durability of Uruk-hai and Black Uruk armour. Right now, Uruk-hai and Black Uruk armour have the same stats. In my opinion, they should have their durability increased by at least 80 seen that they're the elite armour variants of the orcs (even if they're increased by a 80, they'd still not come close to dwarven and elven armour). Uruk armour is described as thick elite armour and right now, that's just not the case. Same goes for the Uruk weaponry. To be honest, armour breaks down too fast for my taste in general. Another idea would be to add durability to armour in general. Apparently many players refrain from wearing faction armour, seen that Goran wrote; "This is already a big problem. Many players don't use faction items because they're weaker. This could basically render faction armor useless." In a reaction to a suggestion on the Facebook page. In order to promote faction armour, make it last longer!

Let me know what you guys think. Be sure to drop a kudos if you enjoy the post, I put a lot of effort into my suggestions!

(edited by administrators)
UrukBowBlack Uruk Armour
This post is locked.

I have several new additions/changes to combat that would make it more interesting and less based on clicking speed.

When you are hit and take damage, you should have a chance of gaining a status effect like Slowness or Weakness for 2-3 seconds. This would be based exponentially on how much damage taken, since you are more likely to double over in pain or be unable to move after being hit by a sword than you are after being punched 6 times, even though those both equate to about the same damage. When you are hit, you should momentarily experience sun glare, but turned black instead of white. When you are hit, your view direction should change, in a random direction, by an amount proportional to the damage you received.

Spears should be given 1-3 more targeting range, in blocks/meters. They also should deal 2-3 more damage when you are on a mount, and +1 damage to other mounteds.

If you are wearing full faction armor and using a weapon of the same faction, it should give a damage boost of 1-3.

Bows should be crafted with rods and cords(see below) instead of sticks and string.

When you have arrows currently inside of you, it should add a slight Slowness effect, until you remove the arrows by crouching and right clicking with an empty hand.

Cords: A crafting material made by stacking 3 string on top of each other.

Toy Bows: A faction-neutral weapon similar to the slingshot of the hobbit sheriffs, made with 1 willow plank and 1 string on a crafting table. They would have a drawback of about 10, given that 20 is a vanilla bow. It would about 3 damage at top draw. It would shoot sticks! The choice weapon for children threatening armored knights everywhere!

Quarterstaves: A faction-neutral weapon made by 1 rod above 1 bronze ingot above another rod. This would give a slight speed bonus, when equipped, and do 6 damage(+5).

Halberds: A weapon used by Elven and Human factions crafted identically to a Blue Dwarven Mattock. It would only have a .5 damage reduction from swords, and have the buffs of a spear, but with one catch. This, if possible, would be unable to attack anything within 1.1 blocks of you, making it counterable by getting very close to your enemy.

Pike Walls: Pike walls would be crafted with a row of 3 spears with 1 cord above the middle one. This would yield 1 pike wall, which would deal the damage equivalent to a spear, to any mobs touching the block, like a cactus.

Leg Spikes: These would be crafted like a compass/clock, but without redstone in the middle. They would be an equipable item for horses/Wargs which would simply make the mount damage any mob it touched.

Shortbows: These would be bows crafted from 1 rod and 1 cord, they would have less damage, range, and pullback time than normal bows. Hobbits would have access to these and to no other bows.

These would be a form of hobbit military that kills nearby animals and collects their drops. They would wield Shortbows and possibly daggers. They would spawn in Woodlands and very rarely in the Old Forest. They would either spawn in parties and have a leader you could hire them from, or spawn as individuals and let you hire themselves.