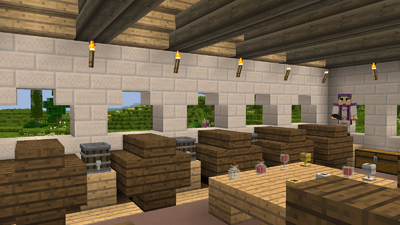 Brewing is the method used to produce various drinks, mostly alcoholic, in barrels. You will need a placed barrel, three buckets of water and six other ingredients, which will vary depending on the drink you want to brew. The recipes are shown below. Brewing is done in steps of ten minutes per...

With inflicting status effects, one thing almost immediately came into my mind: Magic. I don't think you can be more canon than that. But how would you do it, you might ask? Short answer: I don't know, but it certainly must be possible in a gameplay-friendly way. My best thing would be the already confirmed (?) mechanic of ring-forging, so you make magical rings that allow you to use different "Spells" (Maybe just create an AoE on your cursor), and those could then have different effects depending on what ring you use. I was thinking about giving some examples, but can't find any good ones, but maybe they could faction-specific, so elven factions might be able to give strength and regeneration, while mordor factions could give weakness and wither (probably under another name though).

So, new status effects could also be added.

Some examples that I could come up with is the "Mordor poison", "Strengthening" and "Agility"

Mordor poison: Similar in effect to the "Freezing" effect of Forodwaith, by hurting you every now and then if you don't have significant Mordor alignment. Now that Mordor is getting more fertile this might be an option, as you might find edible food there now.

Agility: Might make you faster, but most importantly gives you a chance to dodge hits.

So, that's my idea for implementing more outwards-aimed status effects in the mod, please leave your opinions in the comments!

Dalish Pastry Oven - has texture like a Dalish crafter meets hobbit oven. Cannot cook meat and the like, but can cook bread into Danish Pastry Bread, flour (wheat in millstone) into bread, and perhaps other recipes. Must be crafted using cobblestone around a hobbit oven in a dalish crafting table. Cooking in one grants the achievement and title "Dalish Pastry Chef"

Grindstone - used to sharpen swords and other tools. Click once with a weapon to sharpen. Lowers durability but has small chance of giving a damage modifier. Tops out at keen. Deals 8-16 durability damage per click, or less if that is too OP. Craft smooth stone on the first six blocks and a wood plank, a stick, and another wood plank at the bottom, in that order.

Whetstone - a pocket sized grindstone which deals less durability damage (2-4) but much lower chance of giving a modifier. Tops out at sharp. Craft 2 smooth stone. Each whetstone can be used 10 times.

Mug of Endless Beer - a standard mug, filled with either ale, mead, vodka, dwarven ale, or maple beer of any potency. Once you drink from it, you take minor damage (like orc draught) but it never ends. Can be poisoned, but must be found in chests or from powerful foes.

Arrow box - crafted either in a cauldron formation with dried reeds to make dried version or with wooden planks to make wood version. Can be filled with a stack of arrows. Click with an empty hand to retrieve one arrow, shift click to open a GUI with the whole stack.

Quiver (not a block, but still) - craft with either an arrow box and leather, or leather in a door formation. Can be attached to a chestplate or pants, and once again, can be filled with arrows. Press a button to open the GUI where you can input the arrows or take it out. Killing an enemy with a single shot from a quiver with only 1 arrow gives you the achievement - One in the quiver, and a similar title.

(edited by moderator)
BrewingAlcoholicityDale (Faction)Equipment Modifiers
This post is locked.

Hello people! If you've made use of the brewing feature in this mod, and have made massive breweries consisting of hundreds of barrels then you've probably encountered this problem. Trying to brew a large amount of the same this is exceedingly tedious because, it requires you to click in and out of inventories, placing the ingredients in each one, hitting brew, then moving to the next one. To counter act this, I suggest bigger barrels!

I don't simply mean "bigger" as in more inventory space in a single barrel. I mean allowing barrels to mesh together to become a multiblock! The limit on this would be, four blocks from front to back, three tall, and three wide in the front and back! The result would be a larger inventory, and more room to place buckets, along with the most important part, more room for alcohol!

As suggested by Minecraftmage113: Barrels should also accept stacks of items to save additional time when brewing.

Please give me your feedback​ on this idea, and how it could be improved! Thank you!

The ability to be able to name your barrels in the barrel GUI and have your name attatched to it, on a multiplayer server would give rise to players brewing and farming more, whilst also helping in-game trading; for example: If I grow grapes on my own private farms, and i name my Barrels 'El Radagasto' it creates a name for it (like how champagne is from a certain region) and also makes people want a few barrels of that trendy beverage. Its just an idea, and hopefully an easy one to implement, but it'll give brewers and farmers a bigger incentive to create the stuff which i think makes this mod so cool!

Some ideas put forward by Catman330, Dragonovith and I about the need for a Beverage update!

Also, thanks to Minecraftmage113 for his assessment of this original draft and all the comments he has made.

Heres some of them:

- The Name of the Drink (customized so not just 'red wine') - This should be featured within the Barrel GUI and should be named without XP or in an anvil.

- The IGN (in-game-name) of the Player who made it - This would be set out like an author to a book.

- A correspondance between the hobbit date and the age of the barrel- like in irl how drinks are worth more as they grow older- this could be represented in a very slow further fermentation process, so to make the drink even more potent. This also creates a market for older, more Vintage barrels

- Perhaps being able to make cocktails ( eg. a mix of miruvor and ale or having vodka and pomegrante drinks), or add certain ingredients to add interesting abilities, such as having certain flowers giving eg. underwater breathing for a set time. Perhaps it is mixed in a 'copper mixing tank' by inserting drinks with the '"name defaulting to "<Dominant drink> Cocktail" and then mix the overlays of the drinks as well as effects based on the ratio of the drinks (EX: 1 potent miruvour, and 2 potent vodka, 54%*2 over 3 for alcoholicity, that would set it to 36%, and the miruvour would be 120/3 or 40 seconds of speed/strength 1. titled Vodka cocktail. Another example: 1 potent miruvour, 1 potent orc draught, 1 potent vodka. Alcohol values: 0%, 0%, 54% add together, divide by 3, you get 18% alcohol content, then for effects it is: 2min, 3min, 0, for speed/strength so 300/3 or 100 seconds. and for damage it is 6/3 or 2. title: Miruvour cocktail (first ingredient))'" (Text in the bold '" '" is from Minecraftmage330)

- Customizable barrels- having the ability to add gilded rings around it such as gold- makes the barrrel look a lot nicer, also the ability to change the wood of the barrel by clicking on it with some wood planks (like moss in chisel) would add a very nice feature to the brewing world.

- The addition of sugar increasing the rate of fermentation.

- The region where the drink has come from ( such as 'The Shire')- could be customizable such as having 'Longbottom Distillery' or 'Whitehorse Farm' - Naturally, this could replace the Brewer's name if there are multiple people working to make it, therefore there should be two input boxes and one filled in and the other not (this is in an extra tab of the barrel GUI - a bit like the one in the banner setup)

- Copper pipes- in this mod copper isnt really used for anything that useful (correct me if im wrong) so have copper pipes which can be connected to the large barrels to smaller ones- helping out the taverns on our servers! It could work by using the same principles of pipes in the old Tekkit pack, but just using 'magic' there could be valves at the ends to open/close these pipes. A user could create a 'ring' of these pipes so it has a cool effect of moving alcohol in a sort-of steampunk bar.

- (Wine) Bottles- These beverage carries could hold a capacity of 5 drinks and can be placed on a Wine rack- they could be different colours. Bottles of alcohol could be sealed- having a further very slow fermentation beyond potent, but the seal is naturally broken when the first drink is poured from it.

- Wine Rack- this decorative feature is as practical as it is beautiful, a really nice way to store your bottles rather than just in chests. This could work with a small GUI similar to that a very small chest - perhaps with a capacity of 4 wine bottles or maybe 9? Please discuss in the comments.

- Legendary Recipes, these could be created by the mod creators and could be a very very rare spawn in old ruins, they could be named after old lore characters and carry better effects than just the standard drinks. Admins on servers should have a form of plugin to help make these legendary recipes. eg. Legolas' Liquour, Gandalf's Grunge, Radagast's 'Herbal' Brew or Arda Ale

Any other suggestions pls post in the comments and ill add them and say it was your idea!

I had much orc doughts in my chest, more then 50. This is uncomfortable, so i think that it would be nice if you can fill an empty barrel by right-klicking with an drink.