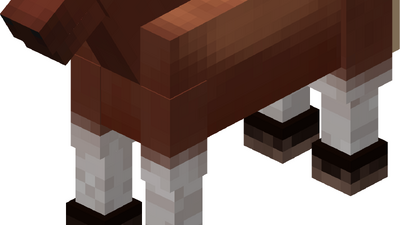 Horses are animals from vanilla Minecraft which can be found in Middle-earth, and are the most common type of mount used by mounted NPCs in the mod, as well as being a relatively easily-obtained mount for players in the early game, significantly easing transportation around the vast realm of...

Did you see the last of upload of lordoftheringsMOD on facebook?

What do you think? Do the rohirrim ride the vanilla horses or new modelised lotr horses? Or will we have to wait a bit more to see the horses designed by the mod?

HorseLord of the Rings Mod Renewed

In the real world, different horse breeds have different 'stats' because of where they live. In a sense, the different climates of Middle-Earth would also create this change. I would've also made 'physical shape' changes, but I would guess people would just shrug them off.

This is for the Renewed version, as I am aware that the Legacy version wouldn't be having any new features.

*Some of the horses I am going to state are inspired by real-life horses, but I won't be using inspiration from complexly-bred, modern-day horses, rather horses from the 16th century and before.

While there are three stats already in vanilla Minecraft and the Mod(speed, health, and jump) I would like to add new things:

1 - Endurance: Horses in Minecraft seem to be able to ride from the Aman to Rhun without a break, and without slowing down. This is, in my opinion, weird. There should be a 'tiredness rate' which would decide the decrease rate in the speed of a horse. This number would be inversely proportional to the speed decrease (meaning the higher it is, the lower the decrease rate). There will be a minimum speed(maybe the slowest horse-speed available?). When a horse reaches this speed, you can do one of two things: Continue riding until the horse goes back to its normal speed(which takes waaaay longer); or feed it. Obviously, horses with lower endurance will eat much more to get back to full speed.

Chariots and carriages would require horses with high strength.

Now we get to the horse breeds.

-These are the fastest horses.

-They have medium endurance and jump, but very low strength. They also have semi-high health.

-These are inspired by the Arabian horse.

-They will have the highest endurance of all horses, as they are from the desert. They will have semi-high speed and medium jump and health, but very low strength.

- Spawns in all grassy and semi-grassy areas of Near Harad.

-These will have the highest strength, as they are used for chariots. They will have semi-high health but a very low jump. They have medium endurance and somewhat low speed.

-These horses have medium everything but are so common and their breeding gives the average+25% of the average.

-They will be found across the area from the Shire until the Misty Mountains, and the area east of Mordor, North of Harad, and south of Rhun.

-Spawn in all of Gondor.

-These are similar to Gondor warhorses.

-Will spawn wherever High Elves spawn.

-These horses only spawn in Dunedain structures.

-Considering their high stats, many might be unable to breed for balance purposes.

-These horses have similar stats to the Common Wildernesse Horses, except that they have higher speed and jump.-Spawn in Bree.

-Spawn in Rhun and Dorwinion territory, also spawns in the area between Rhun and Harad.

*Chariots and carriages are no business of mine, pretty sure many people have mentioned them before, so their chariot-mechanics would be much better than mine.

I know this suggestion sounds pretty absurd, but here I go..

Know the trouble of mounts falling to death? I suggest a solution..

Horseshoes! They would be crafted by putting 4 iron ingots, one in each corner of the crafting grid. Horses (possibly hoofed mounts in general) would now gain a new slot for horseshoes. If the horseshoes are inserted into the slot, the horse will gain +2 protection.

But one may ask, how does it help agianst falling?

They can be reforged or modified, but they can only gain thicksoled, strongshod or lightfooted modifiers, which protect agianst falling.

A possible evil alternative to this would be warg claw-covers (I really can't think of a better name..). They would be applied for the horseshoes slot for wargs, but instead of decreasing fall damage, they would buff the attack damage of the warg. Unmodified would be +2? They could be modified with melee weapon damage buffs (sharp, keen, mighty, legendary). They'd be crafted with the same pattern as horseshoes, but with orc steel on any orcish crafting table. They'd offer the warg no protection.

As an alternative, It may be worthwhile considering to replace the pink trimmed pyjamas of the Dorwinion commoners with clothing that may befit a medieval based and styled agrarian culture.