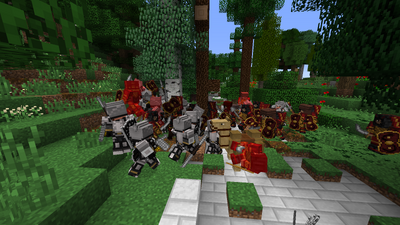 Please note that this article primarily applies to the Legacy (1.7.10) version of the mod. The Renewed (1.16) version is still in early development and may not contain all features listed below. If you haven't done it yet, first: Install the Mod. Perhaps configure it or leave that for later... 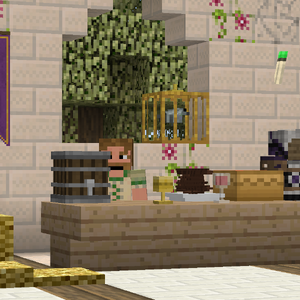 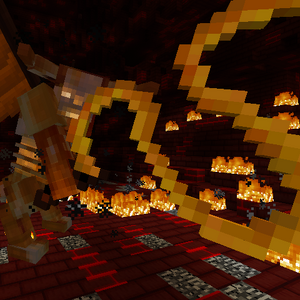 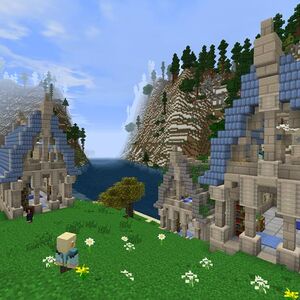 The Gulfing khopesh is a weird weapon. It looks like a billhook. Except you reap gondorians instead wheat. I thought first that kind of weapon is really called a khopesh because the mod called it a khopesh.

You know, I'm french, not english (that explains why my english is not always perfect but wathever). I asked how we call a khopesh in french and google trad said khopesh didn't come from english, but hindi. And in hindi, "khopesh" means "flail". But the gulfing khopesh doesn't look like a flail; it looks like a billhook.

So I've made some research on this weapon once known to be used by the armies of african kingdoms in reality during the Antiquity and Middle-Age.

These billhook-shaped swords are actually called "shotel". They were invented and used by abyssinians (the ancestors of the ethiopians). The particularity of this weapon is to hook the enemy. The shotelai (as we called the shotel users) used the shape of their swords to dodge the shield and poke the enemies on the side with the point of the blade. (I hold it from wikipedia)

It gave me some ideas.

First, I suggest we name it the gulfing shotel instead khopesh for a better accuracy of this kind of weapon and history. It's a better name. The teammod take a lot of attention to the name-accuracy. I saw them struggle for many updates to find a more accurate name for sarlluin and sarngaran (now called luigon and cargon). So I don't see why it'd pose a problem for them to review the name of this weapon, don't you think?

I finished. What do you think?

Cities do not spawn, just a crossroads

Upon reading the previous “Melkor” suggestion made by another user, I started to think that maybe there should be a new game mode dedicated to Dagor Dagorath. It would sort of be an apocalypse style game mode where you spawn in the overworld. For the first few days, it is normal survival Minecraft. But then, after that the next stage happens, where low level Middle-earth mobs start to naturally spawn as well as low level Middle-earth ores and materials. No biomes and no structures. Just the mobs. The stages after that would each spawn increasingly difficult mobs and higher level ores and resources. One of the final stages would include a new biome called Desolation. This Desolation biome would include war related structures for good and evil factions. These structures would be dispersed randomly throughout the Desolation biome, creating the illusion of a ongoing war between good and evil. As the later stages progress. Each Desolation biome would be bigger and include more higher level structures. The fourth to last stage would spawn structures and mobs from the Ice level of the Utumno faction. The third to last stage would spawn structures and mobs from the obsidian level of the Utumno faction. The second to last stage would spawn structures and mobs from the fire level of the Utumno faction. The start of the final stage would make the Desolation biome be so massive that it would be the only biome. The final stage would be broken up into sub stages, with it spawning increasingly difficult bosses in each sub stage. The final sub stage of the final stage would spawn Melkor as an intensely difficult boss fight.

I forget to mention that before the low level stages, there would be a quest line of finding the Silmarils. The first would be found in a new structure in the deep ocean called Ulmo’s sea palace, the second would be found in another new structure in the Nether Basalt Delta. After that, there would be a new quest line to get to Valinor. To do so, you must get a new item crafted by combining the Dragon Egg with eight blocks of undying, which in turn is crafted with nine totem of undying. After that, you would get the Undying Dragon Egg, which you would combine with beacons of undying, which in turn is crafted from eight blocks of undying surrounding a beacon.

After that you would build a portal frame with the beacons of undying and use the Undying Dragon Egg on it like flint and steel.

After you arrive in Valinor, you would do multiple quests to gain the trust of the Vanyar, Maiar, and Valar. Once you do this, you would be able to get access to a new dimension where you would arrive at the Door of Night and speak to Eärendil, somehow obtaining his silmaril.

With all of the Silmarils in your possession, and potentially Feanor released from the Halls of Mandos, you would travel back to Valinor, witness it’s destruction and flee to the overworld, where the first stage would begin.

it only looks wierd because i had to enhance resolution

But this proves it mumakil confirmed

Its from haradic armor photo

Zoomed in a lot

For all the time it takes to equip units I think u should be able to equip them when there first hired (by unit type) not when there already hired 1 by 1 it litterally makes mass equipment of large masses. Of units. Impossible without spending 30 min it's really annoying pls. Fix This by going with my clever solution