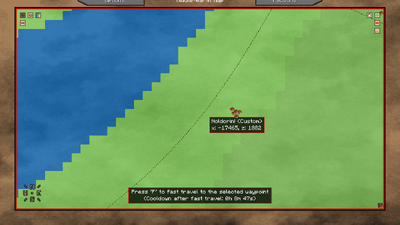 Mini-quests are tasks given by NPCs for players to complete. Mini-quests are started by speaking to friendly NPCs. To keep track of your quests, it is recommended that you use the Red Book, as it records the details of all your currently active mini-quests. It is given to the player by the Grey... 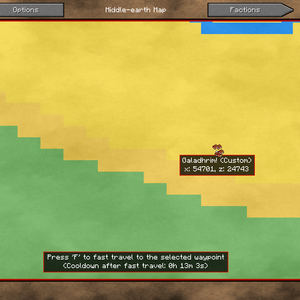 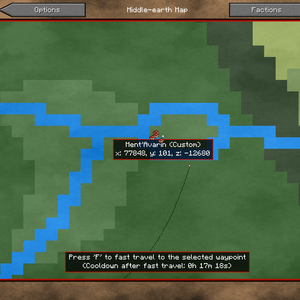 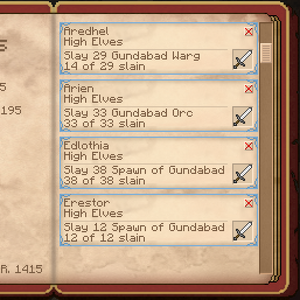 The NPCs like Rohirric Marshals of Hobbit Shirriffs that are used to hire NPCs would get a button labelled "Quest" in their GUI. Clicking on it would open a display similar to that of Mini-Quests, but for bigger, more dangerous tasks. The Red Book would also have a quests tab showing the progress an information of your quests.

If the player has accepted a quest, they will be unable to fast-travel.

Quests should have huge rewards. 500-1000 coins seems adequate, along with 250 alignment with the faction that gave the quest. For escort quests, the coin and alignment rewards will depend on the distance travelled (1 coin for every 500 blocks travelled).

If a player has -500 or less alignment with a faction, there should be a chance, increasing with low alignment, that the faction will start a Headhunt for that player. I do not mean the Headhunting Quests already existent. These headhunts will exist even in singleplayer. There will be a config option to disable them.

Headhunts will have a high chance of occuring regardless of alignment if a player has undertaken a conquest quest in an area in the influence sphere of an enemy faction or if the player accepts a defence quest to defend against an enemy faction.

A message will first be displayed in chat when a headhunt starts:

From this point until the headhunt ends, the player will be unable to fast-travel.

Then an icon of the NPC's head will appear on the map. This icon will start moving towards the player. It will be unable to pass through certain biomes like the Misty Mountains except by roads, unless the player or headhunt icon is in the biome. When the icon reaches the player's location, unless in banner protected land, a message will be displayed in chat:

The NPC along with a small army of NPCs (20-30 NPCs) from their faction will spawn nearby. This army will head towards the player. Orcs from this army will not flee from the player. There will be a 50% chance that all the units of this army will be mounted. This will not occur for factions/subfactions where the main units are never mounted (for example Isengard and Black Uruks). Troll-like NPCs will not spawn. Rohan and Rhudel headhunts will always have only mounted units. Isengard will have a 10% chance to launch a Uruk Berserker headhunt instead of normal headhunts (normal Isengard headhunts will only have Uruks). These NPCs will have a much higher follow-range (100 blocks?).

The leader NPC will be a seperate kind of NPC and will have 50 health, and will be suited in the strongest faction armour and weapons. Orcish leaders will have a separate 50% chance of wearing full Morgul Armour. For Orcish factions, the leader will also be a kind of Uruk (but will still be able to ride a Warg, they can probably find at least one Warg strong enough to carry them). The leader will also wield a melee weapon of their choice from their faction, preferring weapons with 150% or higher reach if mounted. They will never use daggers. Their weapon will also have a 25% chance of having a bane modifier of an enemy race. Their weapon will also have a 50% chance of having the mighty or legendary modifier.

If the player kills the NPC leader, the headhunt ends, though the player still has to deal with the army. The player will also gain 50 conquest in the area.

If the player is killed, the headhunt ends. The NPCs will then be able to despawn like normal NPCs.

The NPCs will disappear if the player is not detected nearby.

Leaders of headhunts or NPCs that the player is told to hunt will drop between 100 and 300 coins, and a random smith's scroll. They will also have a 50% chance of dropping thier held weapon.

Additionally, each faction could have its own special armour/weapons similar to the Mallorn Mace or Gondolinian armour/sword, but not quite as powerful, that could be dropped by their NPC leaders.

At Henneth Annûn, an NPC named Captain of the Rangers of Ithilien could appear. Upon interaction, a message would appear:

"The armies of the Enemy grow stronger! If we could recapture Ithilien, perhaps we could delay the advent of his attack on Gondor, You would be forever honoured in Gondor if you could Obtain 97 Conquest Points in this area!" 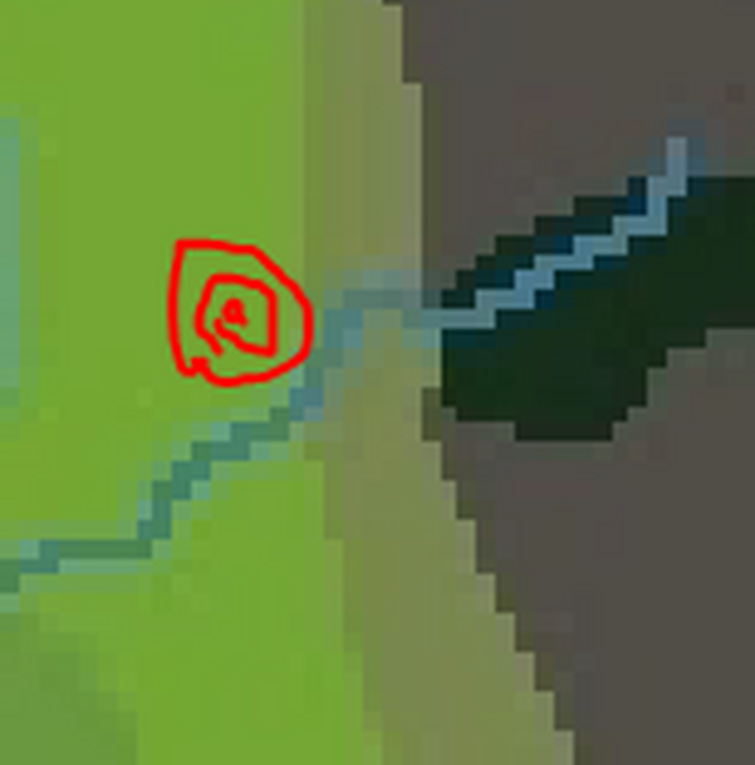 The crappy circles would be replaced by a red area like areas with conquests in the conquest map.

If you obtained the conquest points, a toast would appear saying "Quest Completed - Henneth Annûn. If you went to the NPC and interacted with him again, he would give you a large sum of coins and your alignment would increase and he'd say something like "oh yeas nic gondor honours u now get outa here".

In Hobbiton, you meet a blue dwarf called Shorty McShortface. He says to you when you interact with him:

"I've sold my jewels and smithcraft far and wide, and now my feet turn towards home. But traveling is no easy task, and more than once I have come upon Orcs on my journeys! I wish to return home safe, and I would gladly pay you handsomely if you could accompany me to Thorin's Halls!

You accept the quest. Shorty McShortface now follows you around and apparently doesn't notice if you lead him to Mordor instead of the Blue Mountains. Still, you decide to take him to his destination.

While travelling through Eriador, a message displays in chat:

You proceed to go faster. In the map you see an Orc's head moving towards you from the Far Downs.

While in the Blue Mountain Foothills, a message displays in chat:

You finally reach Thorin's Halls, and Shorty McShortface gives you a sum of money, thanks you, and then proceeds to act like he doesn't know you.

Comments will be appreciated, and I would like ideas for more kinds of quests, along with possible loot/weapons/armour to be obtained from killing Leader NPCs.

That's exactly what you read in the title.

These would be missions that required you to achieve a certain achievement. They would be available only after the pledged, they would be given by the commanders of your faction and allied factions and the conquest made by troops would be valid for the quest.

Many know I am kinda troubled by the fact that some players grind alignment for their factions by slaughtering the unarmed and untrained pleb of their enemies. From my understanding this behaviour does not fit in the policy and objectives of the mod. Now here's a new proposal on how to encourage more glorious ways to get alignment above the less honourable method of slaying peasants. And exactly that is what this is about: "What is the honour of slaying the insignificant folks of thy enemy?". In my opinion there is none, unless explicitely requested.

Both combined adjustments will make gaining alignment for some players more difficult and hopefully this will simply lead to a more strategic choice of activities, targetting more logical areas to strike against enemies and planning ahead, using quest assignments to ensure slaying foes is optimally rewarded by players' frens.

I would appreciate any feedback to this concrete proposal and based on further throughts and the feedback received the proposal may be improved and adjusted accordingly.

Here's a number of suggestions related to the subject that may be of relevance when considering whether or not and how to implement the above proposal:

Although mini-quests are already inculded since Public Beta 20, I still have found a minor bug in it:

I was requested some ciders and brought 3 different mugs. 2 were potent, 1 was strong and had a tag "belonged to <name>". The potent ones were accepted, the strong one was not.

I think, the cause might be rather is definitively the "belonged to" tag, and not the different potency. Not totally sure about it. I tried to refill the beverage into another vessel, but it takes the tag with it.

Could someone try out, if that holds for used armour/weapons as well?

Edit: Ran more tests, it's definitively the tag, that is causing the trouble.

(I did read the FAQ and the What Not To Suggest before posting this.)

Escort Quests: (Not asking, but it would work better with cities when they are added.)

This will be for wandering merchants ONLY. No other vendors. If you find a wandering merchant, he may hire you as an escort (via quest). Before cities, basically stay within like 20-40 blocks of the merchant and dont let him die. After a specified amount of time (when he gives you the quest he tells you), he pays you about 100-200 coins. You could spice this up a bit by spawning some highway robbers nearby that you have to defeat. When cities are added, you might find a merchant caravan on the road. In this escort, you have to take them to the quest-specified city/villaige. Again, highway robbers and enemy invasions might make this interesting.

I know for many of the miniquests now you have to gather food or slay enemies. How about a gather materials quest? Say you talk to a Gondor citizen. He says he wants to build a new barn, and asks you to grab him a stack of 64 wood planks by the end of the day, and you will be paid. If you dont turn in the wood by the end of the MC day, you fail the quest. If you turn in the wood, he pays you 50-100 coins (depending on the material. This would work with Gondor Stone or bricks as well).