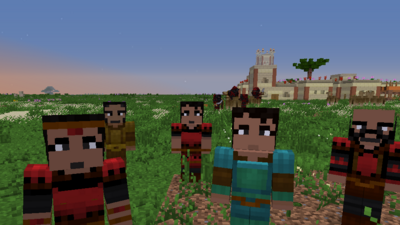 See also: Near Harad (Region). The Southrons of Near Harad are the swarthy men of the great Southlands, mostly isolated from the Westlands of Middle-earth. For thousands of years, they have been at odds with their northern neighbours, the Gondorians, and they have sworn allegiance to Mordor for... 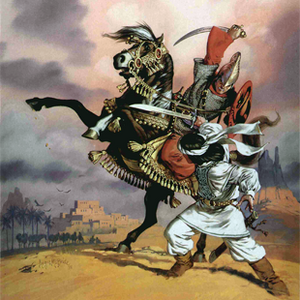 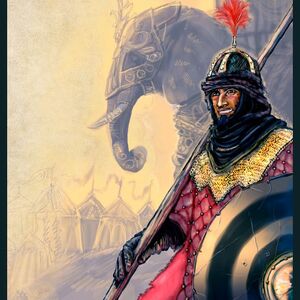 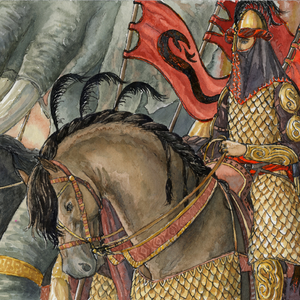 I've been playing as Near Harad for a while now and I've noticed something that's beentroubling me. Almost every faction in the game has something special and unique about it, Rhûdel with their fire, Rohan with their horses, the Half Trolls with their rhinos, dwarves with their fine equipment, hell even the hobbits with their cooking. I could go on, but one faction that doesn't really stand out is Near Harad. We do have a few things... For example, we have kebabs, slavery, and a jumble of sub-par bronze equipment. But this doesn't really cut it. We need something to put Harad on the same level as other factions and make it unique, and below I've compiled a list of rational solutions.

•Mûmakil... I know that the Mûmakil have been on the verge of being added ever since the mods creation, but they never were due to the impracticality. I propose they be added but are closer to rhinos in their application, a single rider on a mount that does contact damage, just maybe a little slower and more deadly. I know it's not how they were portrayed in the movies but it's not very practical to have a tower of NPCs and/or players atop a mount, especially in multiplayer. I would hope Mûmakil are added in some fashion at some point, as they're probably what the Haradrim are most famous for.

•Poison... If Mûmakil are too impractical then Near Harad has to improve elsewhere. It is mentioned in various lore that the Haradrim often coated their blades in poison before battle. I think adding things like poisoned scimitars or khopeshes or hell even all of the Haradic weapons would be a great idea. The mechanic already exist and the application would be easy. It would be a much needed buff after the bow of Harad was nerfed, and all of Harad's tools are average at best anyways. Poisoned tools could be crafted shapelessly on any Haradic crafting, just like daggers. I know this may be alarming to some as being too OP, but such a weapon already exists in the form of the morgul blade, which does more damage than poison anyways. Besides, as I said Harad doesn't have anything else, and our weapons do average damage.

•Embracing bronze... I believe that it was mentioned in another thread but bronze armor, such as the corsiar's armor, is overlooked. The point of armor that doesn't protect you as well is to gain mobility and sacrifice some protection. So, maybe Corsair armor and other lighter bronze armor could have a slight speed buff to make up for their cruder construction. This of course would not have to be exclusive to Harad, more of a general suggestion, but I think it would be fitting for the Corsair armor in particular.

•Snake pots... An interesting idea here. The men of Near Harad are loosley based off of the Arabs of North Africa. One notable North African empire was Carthage, who made use of snake pots in warfare. Now, I know there are no snakes currently in the game, despite being referenced to on the flag of Near Harad, but there are scorpions and there are flower pots. Right clicking on a small scorpion with a flower pot in hand can give you a scorpion pot, or they can be sold by Nomad traders or other traders from Near Harad. Upon throwing a scorpion pot it will shatte, releasing the captured scorpion(s), who will attack and lock onto the closest NPC or player. It would be an awesome orginal idea that isn't too OP as it is difficult to acquire.

Well that's all I've got for now, but I think my point has been made clear. I hope you enjoy my ideas. Thanks.

As I am sure you all might be able to tell, this is about mûmak, or more specifically signs that there sooner than one may think. Now you may be wondering what these signs are now that I brought it up. While think about it, the town of bones waypoint was added and described, alongside a big harad overhaul just an update ago. Additionally gulfings already have mentioned mûmak in current speechbanks, and spawn in far harad arid savannas. Mûmakil skeletons are a thing too so theres that.  On top of all that to those dismissing this as a conspiracy theory keep this In mind ,  we were in similiar situations with both the taurethrim , and easterlings just a bit back in the mods history. So what do you make of all this?

THIS IS NOT ADD MUMAK NOW ITS HOW TO MAKE THEM POSSIBLE make the npc actually multiple entities other mods prove the concept to be possible not that im suggedting anything like use there code OH NO IM NOT mabye a npc that has like 5 hitboxes then its multiple entities and thus multiple riders oh and as for size it can be like balrog size in hieght and 2.5 times as long and 300 hp perhaps trust me ive seen examples of one mob with multiple hitboxes just cant think of one off top of head also you dont have to be relaint on a mods source code to draw inspiration off of its code and as mojang eula forbids mod copyright thats not an issue anymore for taking just a couple lines from flans mod and coding from there to help get multi hitbox/entity mobs and balrogs prove you can make big things so thats somr help

it only looks wierd because i had to enhance resolution

But this proves it mumakil confirmed

Its from haradic armor photo

Zoomed in a lot