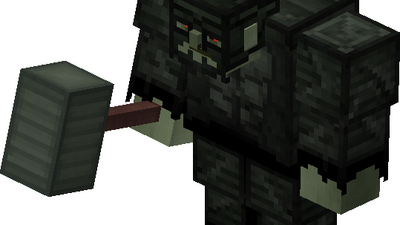 Olog-hai (Black Speech: Troll-folk) were trolls bred by Sauron at the end of the Third Age to be stronger and less vulnerable to sunlight. They lived mainly in southern Mirkwood and Mordor. The Olog-hai are described as being taller than a man, covered in spiky scales, and carrying war hammers...

There is a huge issue regarding Olog-hai in the mod. The word means Troll-Folk, which is a pretty broad term since Troll-Folk could include every type of Troll. That is why I am proposing that the Olog-hai mob should be renamed. I suggest that it should be renamed to Gertheryg, which means Horror-Troll. I believe that this more accurately defines the mob rather than Olog-hai.

Trolls: an amazing and important creature of Evil added in game, to bring ruin and destruction upon its foes... But unforunately underpowered and overlooked.

After experimenting a bit today with the various types of Trolls in-game, I have come to the conclusion that such a large and fearsome beast, is really rather easy to take down, even when multiple armies of mobs are fighting, alongside players, or even just NPC vs NPC.

With the mob being so large in combat it is an easy target; but I also realized, that when using the most commonly used bow by all players (Good or Evil) on all servers due to range and damage, the High Elven, or some other form of Elven bow can take down a hill troll (Formerly known as a Mountain Troll) in an average of 7-8 Shots, in under 10 seconds with the regular Vanilla Minecraft bow, taking about 12 shots to kill in under 20 seconds)

In combat, this is generally the main target that a player will attempt to focus down before other mobs, due to their speed, reach, knockback, and somewhat higher health than other mobs. However, it is still too simple to take down. Even without armour, the trolls had thick hide, and were hard to take down as described multiple times throughout the books. Giving all trolls area damage as well would be an important feature to match their lumbering swing of ther arms.

I understand that the Elven bows are powerful, and have good range, but in a realistic manner (Excluding head shots) a towering, beastly Hill Troll should take a much longer time to take down, and should have higher health, as well as an area effect of damage, that Olog-Hai have.

Here are the stats i've come up with, excluding trolls with multiple heads:

Mirkwood Troll: 10 shots average to kill (Due to Armour)

I feel that each troll should take atleast 6-8 more shots of the High Elven bow to kill; however, in order to balance their power they would spawn much less frequently. Still a Hireable unit - but cost more coins.

I also feel that some of the Trolls could use some redesigned armour.

The Mirkwood Troll is the first one that comes to mind; I can't tell you how many times I've heard people say or joke about the "Pokéball" on it's chest. We know it's a spider, but perhaps a more crooked armour or similar armour design to the Dol Guldur Orc would be more appropriate? Perhaps even adding a horn or some sort of design onto it's helmet would look great.

ie: Not the biggest fan of the Hobbit Movies, but perhaps a similar helmet or armour design?

Mordor Olog-Hai, Their armour looks great, but maybe adding some sort of horns or unique design on their helmet?

One of the trolls that I feel need more health and an area affect when winging their clubs. However, their lack of armour still makes them weaker, but perhaps adding a helmet on some or maybe some have a chest plate, even if it's leather padding - Considering there are 3-4 different clothing types for these trolls, you could add armour to some as they spawn with variable looks already.

Despite their small size, and "Yeti" like appearance, they need more health, and maybe some random bits of armour on them (Or maybe those that spawn in Utumno or certain parts of Angmar?). Although little is know about them, as they're only mentioned once or twice in the books, A new colour re-texture and possibly some form of armour on some, not all, would look nice and make them more of a worthwile hireable unit.

Cave Trolls: A much wanted and desired unit for those players who are in the Gundabad faction, and more is known about them, described as having "a dark skin of greenish scales". The foot is "flat and toeless". and The creature's blood is black.

Possible jagged armour as seen on the Goblins of Moria, in the movies, might be appropriate as it would be a main power-unit for Gundabad to fight among it's ranks of Orcs, Uruks, and other fighting beasts. Helmet could possibly look like the Uruk-Hai Berserker's helmet, with no crest?

Troll Men***: The Troll Men of Pertorogwaith also should be mentioned in this suggestion forum as they are significantly underpowered. Considering their size, and brute strength, they should be at least as powerful as an Isengard Uruk Berserker, if not more so. Currently, A Dwarf Warrior can take down one and a half Troll-Men warriors, and something about that just doesnt seem right, considering what an incredible faction the Troll-Men are. This would increase their significance in Middle Earth, and also make their units truly worthwhile to hire!

Trolls will always be cool, and are an important unit on the battlefield that deserve more love and a revamp: Looking forward to the next update, and possible an update on these fantastic beasts.