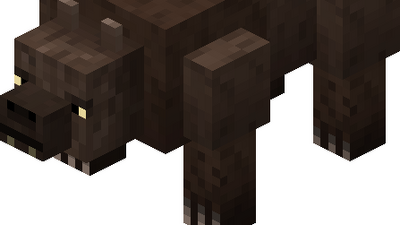 Renewed Snapshot 5.5 Wargs are large, ferocious, evil creatures found throughout most of Middle Earth. They resemble wolves, but are larger, stronger, and more intelligent. They are often found being ridden by Orcs, though they also pose a significant danger on their own. Killing a Warg earns...

The Taurethrim should have at least one allied people(or animals), right?

The Jaguars of Far Harad(they only spawn there naturally), friends of the Taurethrim, are Warg-like creatures. They are neither rideable nor, maybe, hire-able. They would spawn on Taurethrim invasions as well as conquest in certain biomes.

They would be smaller than Wargs in size (bigger than wolves), but much faster. They would also have much faster attacks, but with less damage and less health.

Some Morwaith hunters fight these beasts, and as such, some wear the skins of these Taurethrim-friends.

Some of the Jaguars can be befriended(by being fed certain meat, flamingo maybe, while having a considerable positive alignment with the Taurethrim), and they will fight with you inside and around the jungles, but if you tried to take them too far(near the desert maybe?), they would leave you. They would also attack any enemies of the Taurethrim wherever they find them, and attack any wargs and orcs since they can feel the taint of the Dark Lords on them.

They spawn naturally only in Far Harad Jungles, and they hunt flamingos. They will also try to attack crocodiles in packs where they find them. They like to follow the Taurethrim around, especially the soldiers, since they both like to hunt, be it animals or two-legged servants of the Dark One.

I know this suggestion sounds pretty absurd, but here I go..

Know the trouble of mounts falling to death? I suggest a solution..

Horseshoes! They would be crafted by putting 4 iron ingots, one in each corner of the crafting grid. Horses (possibly hoofed mounts in general) would now gain a new slot for horseshoes. If the horseshoes are inserted into the slot, the horse will gain +2 protection.

But one may ask, how does it help agianst falling?

They can be reforged or modified, but they can only gain thicksoled, strongshod or lightfooted modifiers, which protect agianst falling.

A possible evil alternative to this would be warg claw-covers (I really can't think of a better name..). They would be applied for the horseshoes slot for wargs, but instead of decreasing fall damage, they would buff the attack damage of the warg. Unmodified would be +2? They could be modified with melee weapon damage buffs (sharp, keen, mighty, legendary). They'd be crafted with the same pattern as horseshoes, but with orc steel on any orcish crafting table. They'd offer the warg no protection.

As a player primarly playing in evil factions, I've noticed that wargs tend to be pretty much useless as both mounts and hired units. So, I suggest just a little bit of a buff for them.

First of all, warg health should be increased from between 18 and 40 to between 30 and 40. Why? Because such low health just doesn't make sense compared to the health of some other mobs. Lions, which are actually supposed to be much smaller animals, already have 40 health (in this mod tho, they appear to be around the same size for some reason..). Increasing hit points would also make them a bit more useful for combat, since while playing Durin's folk I noticed that warg invasions are ridiculously easy to defeat compared to any other invasions.

Second, their speed. All the wargs except for some Gundabad wargs, tend to be useless as mounts since their speed is so slow. Even for Gundabad wargs, finding one which could even get close to a swift horse or a rhino, is very difficult. So, I suggest, that their speed as mounts is increased. Gundabad wargs should be somewhere around Rohirric horses (after all, they are supposed to outrun you..) and the other faction wargs shouldn't be the speed of a giraffe.

Last, but not the least, wargs should be able to jump while mounted. They clearly can jump while not mounted, I constantly see them trying to hump walls and other things that get in their way. They definitly did jump in the movies and pretty sure that so did they in the books. Their jump wouldn't be as impressive as horses of Rohan, but 2-3 blocks of jump height would already make them way more useful.

Hello. Is there a mod that will show the speed of wargs? I know there are many that work with horses, but do any work with wargs?

Sure we do know that the Orc of the Misty Mountains allied with Wargs, so do Isengard. But Mordor wargs? I have no memory of them. I read the entire book and there is no one single word mentioned their existence.

I found an awesome answer on this topic:

I summed up some reasons that there are no warg in Mordor:

Let’s talk about the mod

Currently, Mordor included every features of factions with Orcs like spider of Dol Guldur, the best trolls, the best Uruks, the strongest armours, every recipes that others have… There is nothing wrong about that situation, but I believe each factions should be more unique and have their own characteristics and weaknesses. If Mordor wargs are removed, it’s always easy to a Mordor player to hire the fastest wargs from Gundabad and the decent horse cavalry of Near Harad and the Variag riders of Khand in the future.

What do you think of this topic? Welcome to join the discussion!

When I receive a kill warg quest, especially kill gungabad warg quest, I always want to avoid it. Because it is just so hard to find a warg in the mod! In an extreme case, I received a kill 30 orcs quest and kill 24 wargs quest at same time, but I finished the orc one first while I only kill few wargs.

To deal with this situation, we have a simple, easy, lore-friendly and definitely cannon solution: warg invasion.

Why it is lore-friendly and cannon?

In The Lord of the Rings, it is most prominently mentioned in the middle of The Fellowship of the Ring, where a band of Wargs, unaccompanied by Orcs, attacks the Fellowship in Eregion. During the War of the Ring in T.A. 3018–19, wolves prowled outside the walls of Bree.

What is a warg invasion?

A invasion of a band of Wargs, unaccompanied by Orcs, WITHOUT warg bombardiers.

Where should a warg invasion happen? ◾ Eriador. Eriador is a place for beginners, a warg invasion would more firendly to them. ◾ Breeland. Although Breeland is a peaceful place, sometimes you should handle a few simple troubles during the War of Ring. ◾ Eregion. Because it is connon. A uninhabited forest would also favour by warg king. ◾ Vales of Anduin. I believe it is connon. The wargs always try to accack people who live there. ◾ Lone-lands?

By placing a bed on a block near a wargskin rug, so that they have 1 block of overlap, you can make it shake and slide as if it were alive. If you stand on it for too long, servers drop you for flying, too.