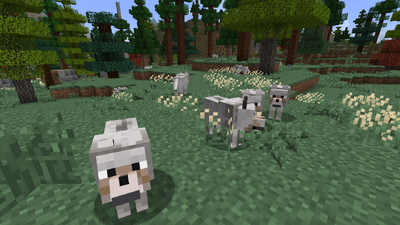 The Wolf is a mob from vanilla Minecraft that has been in Middle-earth since Public Beta 11. They are at the top of the food chain in many forested temperate to cold biomes, and would dominate those lands if it weren't for the presence of sentient species like Men, Elves and Dwarves. More evil...

This mod is great. However, I do have some things which I would like to see in it. I hope my suggestions are not too troublesome to be implemented.

Constructive criticism and suggestions are welcome

This is a general suggestion for taming the wild animals of this world
please note that HP refers to a half heart, or a health point (hence HP), not a heart.

Once caged you can feed them (seeds, bread, or other farm produce, prefer seeds/bread.) They will then after about a day (in game) of kind treatment trust you. You can then right click the cage to open the door, a gui would then open based on the bird.
all birds lose 1 hp once tamed, this mimics the typical softning of a creature that no longer has to fend for itself (hunt etc)

A magpie/raven/crow (i assume magpie as it takes shiny things would have a "steal gui" which would consist of an icon for wanted item and 2 arrows, it could steal small foods, rings, or possibly daggers. You would then be able to make a player/align blacklist for who not to steal from.

Most birds could act as a carrier, they would have a gui including a slot for parchment (paper) a slot for a feather (quill) and a slot for ink. you would then be able to type a 1 page private letter to another player. (no threat of intercept unless bird is slain, helpful if /msg is disabled, admins can see it and you don't want them to such as for the "league of shadows", or if you just want more realistic gameplay.)

Parrot (and other speaking birds)

In real life these birds act as recorders, so I propose that when you open the cage they open a gui with an info box on top and a "perch" button bellow. If you select perch it will begin riding your shoulder, and after placing back into the cage the info box will contain information about all players met on the previous journey (skin model, last known alignments, last known location, etc.)
The jungle parrot variety is tamed faster when fed fruit, especially mango.

A new larger bird these birds will attack players if attacked, and will naturally hunt smaller birds and rabbits (as well as fish when added.) Once tamed I propose them needing a multiblock cage as suggested Here due to their large size. These are fed raw rabbit meat or raw fish instead of seeds to tame. Once tamed you can set them to 1 of 3 modes,  for each mode (other than passive in cage) you will need to provide them with a stand alone fence as a perch.
These birds have 15 HP when untamed, and have 13 when tamed, as well as having an attack damage of 4.

They will hunt down, and kill any rabbits that try to steal your crops (16-64 block radius.) The rabbit meat would then be collected (and eaten, not stored) by the bird of prey.

They will fly over a stream or lake and have a chance to dive and catch a fish. They then store this in an inventory, and eat some over time. They would periodically take rests on their perch, and would fly back to it if their owner is near it.

They will hunt down small birds owned by either players/factions not on the blacklist, or only players/factions on the whitelist. They will then savage the bird they catch, and leave any letters or items carried by the bird in a pile of feathers (perhaps an entity to preserve items, or just feather items.)

Literally the most useless pet ever they are tamed by intentionally feeding them lettuces, carrots, seeds, or other vegetables. After taming you must feed them daily, or else they will eat crops, or if none are provided they will die. Once tamed you can right click them for a gui to store food for them, or to have them do a trick. If you have it do one of the various tricks (not sure as of now, probably stand on hind legs and walk would be one) the more complex the trick the more satisfied any watching children will be, and they might even give you a coin or an alignment, but if the trick fails the children would have a chance to become disinterested and wander off, as well as lose much of the chance to give you stuff.

getting money or align off this will give the "entertainer" achievement and title.

A rare white bunny variety with red eyes. It is mostly blind, and therefore the player can come twice as close without chasing it away. No higher success rate for tricks, but higher aproval rating.

Back from vanilla these pets would act much the same, but they would also have chances to be tamed with meat (cooked porkchops AKA bacon would have the best chance.) These would also have the ability to guard crops, and will attack enemies of your faction other than trolls ents wargs and huorns similar to a hired unit.
Untamed wolves will have 20 HP with an attack of 5 (possibly attack players if starved.) once tamed they are wonderful little dogs with 17 health and 4 attack

Vanilla cats are useless... lets just leave it at that.
These cats would be found in the wild as feral cats, or bobcats/lynxes. after taming with fish or chicken they will be able to hunt fish for you similarly to the birds of prey, but instead would sit at the waters edge to do so. they will also attack enemies similarly to dogs, but if they fall below half health they will make a jump swiping attack (roughly 1/2 block radius with 4-5 attack) then flee (my cat has done this, not sure why. basically they jump about 1 foot into the air managing to swipe their claws all around them then sprint away, its impressive.) They will then continue to flee from any enemies until they are either above half health, or enemies are no longer near you.

Bobcats/lynxes would be larger cats (dog size in model) with 23 HP and 6 attack, once tames they have 20 HP and 3 attack.
Feral cats would be the current size (shorter tail, the current thing is absurd.) They would have 17HP and 4 attack, and once tamed would have 15HP and 2 attack.

I think I covered all the basic pets. If you think I should change or add something feel free to say so.