My man, you are forgiven.

He lives, he has reached the Valley Beyond.

(edited by Dragonovith)
A reply to
0

Quote: I'm talking about a server where everyone RP's and RP is the center of the server so to speak. From what I've seen most of those servers either have optional RP (Which almost no one participates in) or the RP is only on a discord server in chats and not actually in game. Sorry if this still isn't specific enough, I don't really know how else to explain it haha

I feel the same way. If you ever find one, please, tell me.

I used the word Noyan in my Easterling lore text, so I think that's an acceptable word.

(edited by Dragonovith)
A reply to Doctor Baggins
8

In my opinion the people of Rhudel should speak Spanish, because their sword is modeled after an Iberian design.

You know, the Dalish could always sail down the River Running to raid around the Sea of Rhûn.

"The language of Dale and the Long Lake would, if it appeared, be represented as more or less Scandinavian in character; but it is only represented by a few names, especially those of the Dwarves that came from that region. These are all Old Norse Dwarf-names."

It's from a letter Tolkien wrote to Naomi Mitchison.

Nobody can say you're wrong, and we all respect your decision. But please, don't leave the chat, you'll be missed.

HorseLordOfRohan wrote: I just want say, those pictures are amazing!

Those are from a game called King of Dragon Pass. 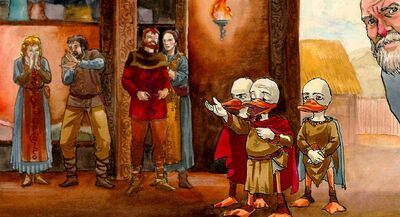 Far past the Red Mountains one would find the reclusive realm of the Ducks, the Quackdom. A folk that couldn't care less about Sauron or the struggles of the Free Peoples. 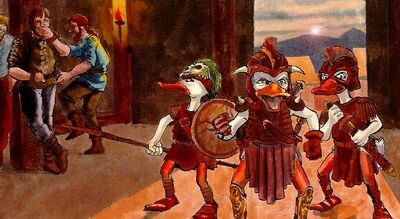 The Ducks are like Hobbits, but instead they communicate with *quacks*. Even though they are peaceful and most of the time just simple farmers, the Ducks can attac too.

Duck Chieftain - These are the lords of the Ducks. If you prove yourself a friend of the Quackdom, the Chieftain will let you hire some warrior Ducks.

Duck Warrior/Bowman - Armed with bronze arms and armor and a shrew wit, these are the professional soldiers of the Quackdom; they patrol and protect their lands against raiders from the nearby countries.

Duck Militia - When war comes to the Quackdom, the Duck commoners arm themselves to protect their villages.

Duck Farmpalmate - They work in the fields while the Duck Farmers overseer their work.

Duck Druid - Priests of the old Duck religion, they can be find in Duck Circles.

Duck Berserkers - Holy warriors of the old faith, who paint their bodies with red and green paint. Can be hired by talking to a Duck Druid. 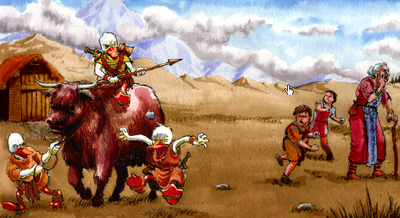 The Duckfolk aren't renowned for the knowledge of metallurgy, and most of the time they prefer to rely on bronze arms and armor, but it isn't strange to see their richer warriors and lords trading with the Orocarni blacksmiths. 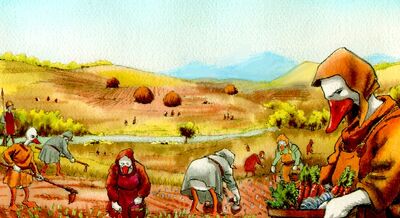 The Ducks don't have cities, they prefer to live in small villages and communities, which are usually ruled by a lord, or by a council, if the village had its means of production seized by the local Duckfolk.

Duck Hillfort - Ducks like to build their wooden forts atop duck-made dirt hills. Here the Duck Chieftain lives with his family and retainers.

Duck Village - Has small houses and a market. In the center of the village one may find the Duck Hillfort.

Duck Circle - Hidden deep inside the forests of the Quackdom lie the Duck Cycles, a clearing where the Ducks practice their old nature religion, with rituals and everything.

Duck Farm - One or two houses surrounded by a sea of wheat. 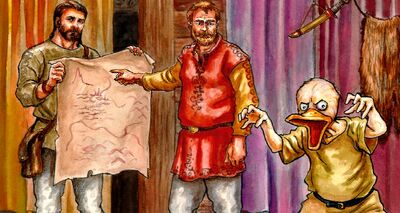 They would be neutral to most factions but the Orcish ones and Rhúdel, which keep raiding their farms and villages. 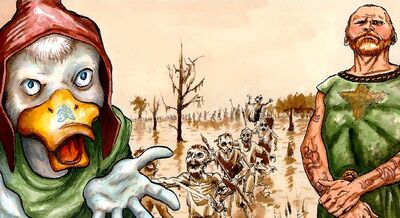 They are not for eating - Kill a Duck.

Last Swim of the Ducks - Hire a Duck from the Duck Chieftain.

Warriors of the Old Faith - Hire a Duck Berserker.

But without the Hobbit, who's going to brew the hooch?

(edited by Dragonovith)
A reply to
5

(edited by Dragonovith)
A reply to
2

Don't forget their steel scimitars and the mass killing machines, which I'd like to imagine are bombs and... flamethrowers.

High King Ithilion wrote: That's wrong. Saruman appeared at Frealaf's coronantion and took over management at Isengard. Prior to that it was owned by Dunlendings and a small hereditary garrison of mixed Gondorian and Dunnish blood.

What was that garrison called? The Isenguard? :p

A small addition: Nan Curunír actually had a well built road, and not a dirt road as it currently is.