I would also enjoy this skin

I see i have missed a lot.

Two of those ppl have been on my server, and been banned. -_- (yama and hippo)

If the rivendell helmet has that lovely crest like i've seen in the Hobbit during that warg chase scene, that'd be amazing. Also PLS don't make the rivendell sword look like Hadafang, im not fond of the idea that elrond gave a generic sword to his daugher xD

'Hippomanplayer' I personally banned him from my friend's server (on which im an admin) for vandalising the spawn with Swastickas and literally asking me if he could create a Nazi custom faction. Please make people aware of him! 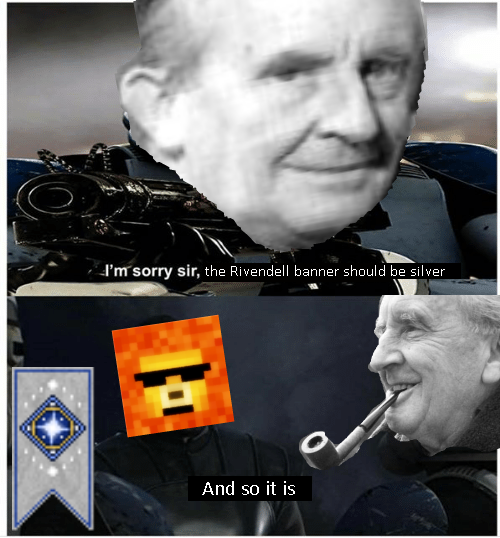 "What I remember about the rise of the Empire is… is how quiet it was. During the waning hours of the Clone Wars, the 501st Legion was discreetly transferred back to Coruscant. It was a silent trip. We all knew what was about to happen, what we were about to do. Did we have any doubts? Any private traitorous thoughts? Perhaps, but no one said a word. Not on the flight to Coruscant, not when Order 66 came down, and not when we marched into the Jedi Temple. Not a word."

I know that I certainly do not tolerate Nazism in ANY WAY SHAPE OR FORM and I cannot stress enought that everyone should hold the same moral against a true evil. I dont care if hippo was joking around or otherwise, if he claims he was, the ban is justified due to the utter ignorance to the opinions of other people.

Hippomanplayer has been banned from a server my friend NittyNitwit owns for Nazi symbols being placed in spawn and for attempting to create a Nazi Custom Faction. I urge you please do not allow him to join. I immediately banned him when i saw what he was building in spawn, a swasticka. The owner Nitty can back this up. If you want proof of these accusations talk to him.  If you know of Hippo on another server and he has done a similar thing, i urge you to report it to the right people. Thank you.

Harrywm (Arachor) Admin of The Rise Of The Great Shadow Server.

(edited by Arachor)
A reply to The Morgul Lord
0