I think that it would be a good idea to add wind so that you can be blown off a mountain, the effect would increase if you are high up, have few blocks near you or you are in between two walls, it would be removed when you have no path leading to the surface or you are in a cave with a dead end. the weaker it is, the quieter it is and the less effect it has on you.

I am not sure whether this is because of changes to the ocean biome causing bugs or anything but my world has only been played in 32.1 so It must be just an ordinary glitch, but I was wondering if there is a way to fix it. Stuff like this will expose ores to players and therefore make the game easier due to the fact that they can get ores much quicker. 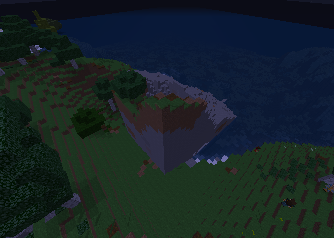 Suggestion, when an archer is killed even if they had been about to shoot, they just die and the arrow does not shoot, I suggest that when you die (or a mob that is an archer) when you are pulling back, the arrow will shoot at half strength and go in the general direction you were looking (up to 45 degrees away)

(edited by moderator)
A reply to JimMoriartyX
0
MilkMC wrote:
Definitely a bug, I'm able to reproduce this crash by throwing a fire-pot at a trader's coin.

Finally I get the answer right before reading the coments... with only game code for company...

(edited by Arcatheos)
A reply to Arcatheos
0
AlteOgre wrote:
Please note that by combining many non-related subjects in one thread, the thread becomes non-specific and it is much harder to get community members' approval (kudo). Also note that a number of your proposals is definitely unoriginal and already included in community endorsed threads, like 1, 4 and 5, and those should be deleted.

I'll give you 24 hours to refocus the thread to one or more related subjects. If after 24 h the thread is still non-specific it will be closed. You can of course post additional suggestion threads for subjects that don't fit in here.

I just saw it now, can you give me more time or at least explain the reason for your comment (I really have no idea why you would do that)

You are forgetting something... You think Aragorn would have slaves? You are wrong...

(These ideas were carefully thought out and every one that does not say it was not original is original, at least from what I can tell)

There are several features that would make the mod more interesting that I want to say here:

2.       Player Trading system, all players will have an option to set up a trading system for themselves, any player that comes can sell or buy the different options that the player has, the player would need to have the items in their inventory for it to work though, what you do is you press a button at the top of your inventory and you can set up trades, this option will take from your pouches and anywhere in your inventory if you have the set items, so you can have a trading items pouch. This would work when a player shift-right clicks them and they have to confirm the trade so that a player can’t trade without their permission. Some people might say this is not needed because it only makes things a bit easier, but it really would help.

3.       NPC to NPC trading, NPC’s would be able to trade with each other and sometimes NPC’s will spawn about 20 blocks away from any shop and walk in say some message about what they want when they get to the shop-keeper and then there will be some sound effect and the NPC will thank the shop keeper and leave, this would take away from the shop-keeper’s supply and if they buy too much the shop-keeper will run out as if a player had, they will buy weapons and food and can even sell things.

4.       Counter Invasions, Sometimes when an Invasion happens, another Invasion of the enemy team will spawn and immediately run towards the other group and then the player will not be noticed until they get within 8 blocks of the battle, when this happens, waves will spawn twice as fast and they will be twice as big, causing epic natural battles that the player can partake in (again, not my idea but I have added to it and I feel it should be on here)

5.       Weapons like clubs and Warhammers should do extra damage to players with plate-armor on, as if they dented the armor and it is stabbing the player. Also, sometimes there should be no damage done at all and amounts of damage should be based on where the mob or player is hit, head shots have potential to be instant kills if the player has not helmet and if you don’t have a piece of armor then you will take more damage there.

6.       Chemistry, There should be a few more minerals added that can do helpful or explosive things when combined with other ones, First of all, refer to the hobbit when they throw the blue fire at smaug, this means that there probably should be khamul’s fire but for dwarves (maybe not even just because of that and just because good players need pyro XD) And different things like that. Maybe even have acid bombs that you throw at someone and it damages them every second for 15 seconds. These are expensive but are good at wiping out lots of enemies. Maybe have mini ones that are less expensive and only do half the damage.

7.       Chariots, These would be attached to a horse or two with some rope item and you cam control it a even turn and look around as you are moving without changing direction, When you hit an enemy, it will deal lots of damage and you can add swords on the wheels to do more damage to people to the side of it, this might have been suggested already and maybe even on the list of things you should not suggest in a way, but I am going more in depth with it. Units would be able to ride with you if you tell the (especially archers) or you can even have them drive it. Another cool addition would be to also have them customizable to have the ability to have arrow launchers, lay fire carpets (even for khamul’s fire) and other awesome stuff like that. Maybe there could be some chariots in certain faction’s invasions like dwarf and Rhun, they could also have special upgrades (with the exception of fire-carpets)

8.       Add ranking systems, players can choose their faction and they can gain or lose power, the more alignment you have the higher rank you are, if you have 5000 you can walk right up to dwarves and doing a quest will earn coins as well as their allegiance, if you have 10000, you are considered King of the faction unless someone else has more alignment, the King as the allegiance of all of the NPC’s and they will follow and protect them but they will not FT with them (same with the less alignment quest system) They will respond to Horns and Swords of command labelled with the coded faction name ex. Dwarf, Gondor… etc. They are like secondary units, when  an invasion spawns at you, invasions of your faction will instantly spawn and resist them, this may sound OP, but to be honest, it is Kinda reasonable… And HARD to accomplish. Shop-keepers will give you massive discounts on items, and you can even hire a blacksmith to follow you and make stuff for you at your house, any enemies like orcs or gondorians (depending on you faction) will run from you except in invasions. Players from the same faction are then considered subject to you and they can’t hit you (sort of like with Friendly Fire) they will be considered lower-class and their units will go to the kings aid then return to the owner if the King is attacked (only works when near the King) When you go to Utumno as King, units of your faction will spawn near you and follow you to protect you. You also get a special title such as King of Gondor (gondor) King of the North (dunadain) or King under the mountain (dwarf) All shop keepers from your faction will generate coins (1 per 30 mins) and will give them to you (only works in loaded chunks) But, to become king, first you must do one big task: there will be a location marked on the map only to you and you must go there, there will be an NPC that will give a quest and you must go to the quest location, when you are there, you will have to retrieve an item from a structure, when you take it, a loud horn will sound and 5 invasions will summon around you, Fast-travel will be disabled and you are set in Adventure mode, if you try to leave it will say: “If you leave, you cannot be honored by your faction if you do not fight” all hired units you have with you will leave except for 5 of them, these ones (if they survive) will be upgraded and become your personal bodyguard, they will have higher attack speed and damage reduction and will have more health, if you survive the waves of enemies, then you will go to the Capital Waypoint and you will be greeted by lots of that faction’s civilians and you will be crowned king, you will receive a crown based on the faction and all King effects are on you when you where it, it has Mithril Level protection and cannot break. If you die, it will stay with you. Taking it off will make it so you only have limited power, trying to take it off will result in a message saying: “are you sure you want to take the crown off? You will no longer have King abilities” If you give it to a player, NPC’s will spawn and crown that player and they will be king, but to pick it up, they must have at least 5000 alignment.

That is all I have to say for now, please feel free to comment and suggest edits on it!

(edited by moderator)
A reply to High King Ithilion
1

I think that it should be 12 coins every 10 minutes because even farmhands earn more money than that and they are cheap. But otherwise this is great, just add a part about people being able to rent rooms and it is done.

I derped assuming it was horizontal when first reading that in JD-GUI. XD

The problem is... by the rtime you wrote this I already knew XD

Well, I play on a server that has a technic modpack and NEI but they have not updated it yet and I don't really have the time to get the updated version.

Okay, just checking, how do you craft fire pots though? I know the Khamul's fire one but not the fire pot.