Dw00010
8 posts
View profile
A reply to Dw00010
0
Thindithron the Great wrote:
I don't think it's likely that the Firebeards and Broadbeams will each get their own banner, since other than their names the two kindreds are virtually indistinguishable.

Probably yeah, although i like the differencing them from each other for the mere lore-building options that it leaves to us, it is true that probably the Firebeards and Broadbeams are not as distinguishable as the Red Dwarven Clans from Orocarni, yet i wanted to give some flavor to to them, not as subfactions or anything, but i mean, two banners don't cause harm right? Was basically what i thought on making them, i had a Broadbeam banner but i didn't really feel like posting it because it was a rough draft of what i wanted to make.

(edited by Dw00010)
A reply to Dw00010
0
PumpkinLOTR wrote:
Out of curiosity, how is the banner fabric patterning achieved? As in, how do you make the banners look banner-ish like they’re actually hanging from something? I’ve always been unable to make my banner designs look like anything other than blocks of colour, without the varying pattern...

EDIT: The Ironfist banner there is a great example. How was the banner textured so that the variations made the appearance of folds or waves in the fabric?

Well at first you should note that depending on the colors that you're using it's not going to work well that much, basically brightier vivid colors (warmer), such as yellow and red, you can see better the effect, while in black and blue (colder) its way harder, the 'folding' effect there on the ironfist banner was result of a series of attempting by using the Burn and Dodge Tools from Photoshop, it's an easier way to make those effects, instead of changing the color manually because then it would match what you said about "look like anything other than blocks of colour".

I honestly didn't have a better name to put on this suggestion but well, let me just go to the point :
I've done some slight texturing around past times and i realized i had some material that could be left for people to use if they wished so, this is mainly aimed at possible inspiration for future additions. I don't have much to say so i will just post the content i have here, also i based myself from so much people that i'd be unable to name them all, so sorry if anyone's work seems similar, i do not claim to be enlightened by originality's might.

This first banner to the right is my version of the Dale Banner, i tried to make a Trush and i cannot exactly say i've done it perfectly, nor in the proper color, but the banner looked neat in my opinion.

This banner to the left was my attempt to make a cool looking Esgaroth Banner, i most likely slipped completelly out of the theme of the Lake Town, but the banner does give me some waterish place vibe, and seems neat, in my opinion of course.

Many peope have done different versions of the Ironfist Clan Banner, i do not claim any originality in this one, i just eddited and gave my own touch to the original artwork.

This one below here was my attempt to make some Red Mountains Banner, basing myself from the Blue Mountains one, i added quite some other stuff and tried to making it pretty much the mountains of rising sun thing.

This next one was the reuslt of mixing both concepts of the Durin's Folk Banner and the Blue Mountains one, resulting in my version of this Khazad-Dûm Banner, i liked the color scheme, although i admit it might need some further improvement.

This one to the left was my own edition based of someone's else work, its the Blacklock Clan Banner, i've seen it before in the wiki before and i think they were made by Ithilion or/and Keltenfeuer.

This one was my ideal for the Firebeard Clan Banner, its pretty rough, the basic Blue Mountains but with the addition of three pickaxes there, the pickaxes idea came from a Civilization 6's Middle Earth Mod.

This one to the left is my version of the Stiffbeard Clan Banner, it doesn't exactly seem ideal and i agree the axe seems a bit odd, but its there anyways.

Here below there will be several things so im no quite sure if i should like actually name them individually and explain what i've done to make them or just simply put them. 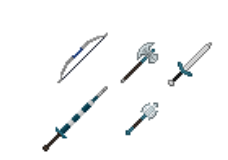 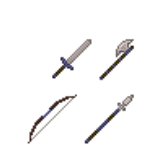 Well so honestly that's it, i'm not sure if im going to further develop any of those textures, at least i don't intend to in the short term, feel free to give your insights and things you'd possibly change, and also to take inspiration from any of those textures. Remember again that i do not claim full originality on them, apologies if your work was used and i forgot to name you.

What region you say? Hmm, I don't no. I'm Brazilian and pastel is a common food in our culture, but it also appears in the Chinese and Portuguese cuisine, and there's also more foods like it, but with a different name, like maultaschen, pierogi and empanada. So, I don't really know :).

hehe, good to know someone is trying to put our Traditional Br Foods into Lotr, first Pastel! Next is Rice and Beans and Feijoada!

You got my respect when you used a Darkest Dungeon pic ;D

(edited by Dw00010)
A reply to High King Ithilion
0
S'moregoth wrote:
I really like this idea!   Would the Men of the Mountains still be alive, or is it just the ruins?

Also, since Black Gondor Brick is currently made of Mordor Rock, and is used very commonly, would it make sense to change it to being made with Black Gondor Rock or Black White Mountains Rock?  It just seems odd that people would a) travel to mordor to get decorative building supplies, and b) use "tainted" rock (for lack of a better term) to build with.

It is totally up to you, I just thought it was worth mentioning.

Actually...Gondor Brick is the correspondent of Marble, while the Mordor Brick is basically Basalt, Basalt is the most common Vulcanic Rock and since the Mountains of Mordor and most of Mordor its vulcanic land it makes sense actually you going to mordor to get stone.