All posts by Korokan

If you're lazy to install other mods to it, you can just put slabs everywhere the mob may spawn. You'll be sure it doen't appear again.

Probably. But given the huge size of the mod, I'd recommand to not push over 1.18 after this because the amount of time needed to port it to a newer version of minecraft may destroy hopes of everyone to see the port complete one day. I fear it.

And the rhun too. Mevans ported sarngaran (or cargon if you prefer) in renewed but not the biome itself.

(edited by Korokan)
A reply to Gorthangthecruel
1

Three months? I didn't see how the time has gone. So I don't know what he's doing to even not inform us of progress of renewed but... it looks pretty huge. Maybe he prepares a surprise to us. But very honestly, he should have sent a message or something, just to say us we don't have to worry about.

Maybe a hiatus. Mevans is right to get holidays sometimes.

A reply to Korokan
0

Maybe but it's not illogical either. According to the lore, the dunedain are few since the fall of Arnor, and populations of elves in Middle-earth didn't stop to shrink since the death of Gil-galad. They don't make children as much in elder days as today anymore, and they go back in Aman to let Middle-earth to the Men.

Same thing for the dwarves. Female dwarves approximatively compose a third of the population of dwarves all around Middle-earth. And marriages are rare among their people, maybe except among the lords and kings who need descendants to whom to leave their inheritance. Their fertility rate is better than that of the elves and their people grow very slowly, so not as fast as the people of Men. And, to be honest, since the fall of many of their kingdoms (Khazad-Dûm, Grey Mountains, Erebor (they reconquered it after, yes, but it counts as a fall because of Smaug), like the elves, their race didn't cease to decline in third Age.

So it's not so illogic the ramping cost system would constrain player to hire only a few of these warriors, because dunedain, elves and dwarves are effectively a few according to the lore. The only problem I cannot solve however is the fact that rohirrim don't have so much alternative either, and this time the lore can't justify they are few. (maybe if we do an exception to them and give them a ramping cost of +1 or +2 instead +4...)

Did you see the last of upload of lordoftheringsMOD on facebook?

What do you think? Do the rohirrim ride the vanilla horses or new modelised lotr horses? Or will we have to wait a bit more to see the horses designed by the mod?

HorseLord of the Rings Mod Renewed

I'm going to tell you a funny story.

I played on renewed recently and I fought among the rohirrim against uruk-hai and dunlending at the border between Rohan and Nan Curunir. To add a bit of fun I spawned a bunch of Gondor warriors and lindon warriors to represent some allies.

And here is what happened:

A lindon warrior began to aim a rohirrim somehow (logical in some way because high elves and rohirrim are neutral but not so logical either because arrows pass through to body of ally, friend and neutral NPCs so nothing justified it). He, like, sniped the rohirrim, and gondorians nearby jumped on the pointy-eared to kill him (I saw something similar when dunlendings killed uruk-hai of Sharkey because they slain some dwarves.).

Then, I saw the thing I still laugh from. After the elf dead, gondorians nearby killed the gondorian who has given the last blow to the elf (because he slain an elf and high elves are friends of gondor). Then I've had a domino effect where gondorians began to slay each other because... they just killed each other, a bit like orcs when they scuffle.

That was very weird and mostly funny to experiment and wished to share it with some people.

Some will see a bug to fix in this. But I don't know if we can really consider it like a bug. Because it's just a NPC behaviour trick caused by the entangling of several codes willed by Mevans.

Oh. And I almost forgot! New wargs are superb in looking and fight system. It was very entertaining to fight them. Thank you Mevans for this wonderful work and mod!

I don't think so. Gulduril blocks need good pickaxes to be taken back. And you take back the block, not the gulduril applied on it. This strategy would need unless one iron-tier pickaxe with silktouch or silken in the hotbar. Evil players cannot transport as much gulduril blocks because ressources needed are pretty high. Furthermore, nothing prevents good players to use bows or just take advantage of the fact evil players will need to recover these gulduril blocks to assault them because you can't recover blocks and fight in the same time (and generally, when you recover, you're too busy to flee the enemy and eat for not dying to care to the blocks around you). And don't forget good NPCs are not coded to dodge gulduril blocks. They may swarm the evil players if they don't have enough troops with them and the result will be the same.

And a last thing I mentionned negative effects given by gulduril blocks would trigger the exact same way of the morgul-flowers giving nausea effects. And the effect doesn't trigger instantly but only if you stay nearby too long. And it'd be the same thing for gulduril blocks. Such a strategy would be very tricky to implement because this is the tick system (and so the hasard) which will decide if the effect is triggered or not. The players control nothing.

Gulduril ables to create morgul blades which deal withering, to create foul portals to go in another world, to create armours which break every swords hitting them ; and ables to corrupt baby mellyrn. Gulduril is using dark magic, and it's implied in its name.

So what about making it more dangerous? I explain...

We know elven rope once set on a block can deals damage to enemies of Lothlorien. Good players can use it to improve their defense system for their bases.

What if gulduril blocks would weaken every good players having negative alignments with Mordor, Do Guldur, Angmar and other orcish factions when they approach them? (a bit like negative effects given to players being too near of the morgul-flowers)

Every good players and NPCs belonging to free-folks factions risk to have weakness and slow effect if they stay near by gulduril blocks too much time.

See? It could give another interest besides to create morgul portals or just decoration to the gulduril blocks. They could be used in a more defensive way to protect evil bases.

Gulduril
A reply to Korokan
1

I don't know. They don't exist yet.

Don't you think there should be an interaction between orcs and man-flesh?

The suggest is done. You can leave now.

Edit: And trading man-flesh with an orc would give you a new achievement: "Looks like meat back on the menu boys!"

"Ally aids only" means whenever you conquer a biome in this section, NPCs belonging to the factions allied to the yours will appear in the biome instead NPCs of your own faction. For exemple, Mirkwood is in "Ally aids only" section of High elves. It means if you conquer Mirkwood at name of the high elves, Rivendell or Lindon warriors won't spawn but galadhrim warriors, wardens, huorns and ents, yes. Because Lothlorien and Fangorn are allies of high elves and Mirkwood is in their conquest section.

A reply to Korokan
3

Lol. You can access it in creative mod. Just search in the inventory in creative mod and you will get to find it. and yes, I discovered it the last week.

Oh! And don't mind the elves and the structure. They aren't implemented naturally. I built them all myself to make a good environnement for the picture. I'm at top of Elostirion in Tower Hills.

What am I supposed to do with this? 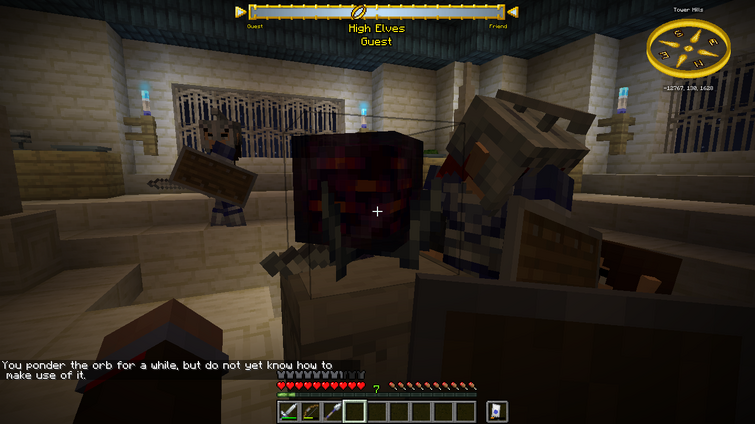 Lord of the Rings Mod Renewed
A reply to Niruzōla
3

Disagree too. Destroying an entire kingdom and forcing the departure of its leader doesn't mean there was a genocide. Angmar orcs doesn't exist anymore, then mountains orcs lived here later, ok. It's what is intended with renewed in the future (angmar orcs will be removed. But not the hillmen.) They dissolved the army of rhudelrim, killed their officers, champions and chieves, why not, it's certainly what happened. But don't tell they committed a genocide either. They coudn't kill them all until last woman and last child and insure no one survived. We don't talk about Anakin Skywalker slaughtering a tusken village, you know? There were certainly survivals and forgotten villages who remembered the ancient grieves of war and hatred for dunedain. With decades and centuries passing, it may be obvious they now restored a part of their might at the end of the third age.

And if you don't count the orcs who spawn at night, Lone-lands are already quite empty. Rudhelrim aren't that common in the wild.

Then, for a more subjective opinion, I just don't like it because an emptier biome is a less important biome, who lost a part of its interest and value to the eyes of player. I'm not for an impoverishment of biomes, even if it's for lore's sake. Realism kills gameplay sometimes. Don't forget it.

Maybe by returning to the old bow system before update 36. Because it wasn't like this before.

The biggest disadvantage in my opinion dosn't come from it but this annoying glitch where elven arrows pass over the head of most of orcs (and it's not the only case!).