I kinda disagree, but this is just my opinion, so I prefer the newer pvp health regen because lets say your fighting some orcs in eriador, when you eat you regen really fast, so if you are low you can gain your health back really fast while in old pvp its not like that, iif you are low you will stay low for a while, unless you take a potion of regen. So in my opinion it makes it easier.

Sauron is not a Nazgul so there are nine Nazgul and then Sauron. Also the Nazgul were leaders of the armies of mordor and Dolguldur so it wouldn't make sense if they were in there own factions

I agree with Drour 1234, there should really be a good and evil there since they aren't connected with the rest of the world, although maybe some factions are more evil than others I don't think it should quite as divided

The link doesn't seem to work it goes to discord and says no text channels?

Could you send me the link

So i thought it would be cool if maybe the edhelvir crystals and the glow crystal, and gulduril maybe had their own sort of geode that spawned not sure what the blocks around it would be but I think it would be a cool idea 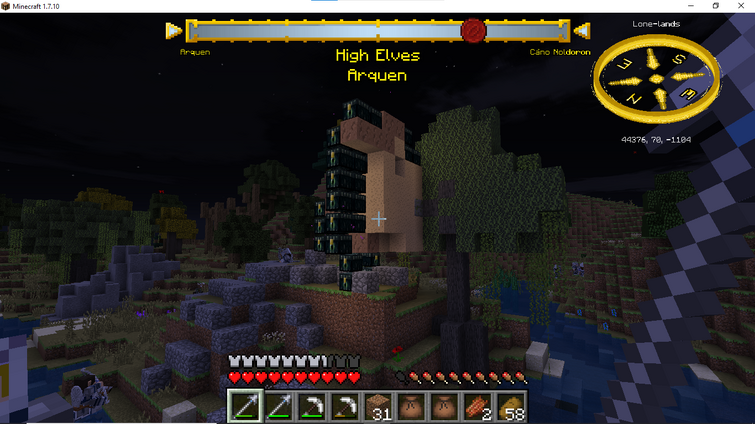 I don't like either mithrils too be honest. Whenever I play I always put a mod on called cosmetic armour which makes it so I can wear mithril but still look cool

This is fairly self-explanatory but does orc bane count as the 3 scroll limit for weapons?

I don't really think that black uruks should be elite even though they have good stats. Reason being is that Black Uruks at the moment pretty much always beat and elf or a dwarf. and with the slightly higher attack speed it will show how elves have trained for thousands of years, and dwarves have trained for about 100, and how orcs no matter how goood they are still aren't as good at fighting, which attack speed in my opinion is showing that. I do agree that berserkers should be elite tier because they go berserk which means they attack as fast and as hard as possible.

So on the lotr minecraft facebook page their was a question that was asked that was "should npcs have the same attack speed as the player or should they have slightly lower.

That got me thinking what if we had it so that so that certain npcs had higher attack speed than others... of course weapons change attack speed but I mean just an overall buff like +10% or something like that.

Elite: ( +10% attack speed )this would include stuff like elves, dwarves, knights of the silver swan, Golden easterling, maybe the dunedain. Also stuff like Isengard Berserkers. This will show how some soldiers are better skilled with weapons then others

Weak: ( -10% attack speed )This would include stuff like orcs, possiby corsairs of Umbar, civlians for all factions. also maybe trolls, The reason I say trolls is that when I think of trolls I think of big hulking brutes and when they hit you you go flying. As it is in the mod.

Average: ( + 0% attack speed )This would include basically everything I didn't say so stuff like regular Gondorians, and also stuff like Black Uruks, and other uruks types. The reason I say black uruks is that

#1 this would be a skill up from regular orcs which would mean that they are already better.

#2 This is to show that stuff like Elves and dwarves are more skilled than even the best orc. And I think that this would be an easy way to show they are better with out dramatically changing any stats

Possible setback: I am not a coder and don't know anything about coding so this may be more difficult.

Thanks for reading this essay of a suggestion !!!

Or maybe a lightly armoured elf

I do agree that they are rare and hard to get, But no orc should EVER be able to be an elf unless it was like the great goblin from the hobbit or the orc chieftain from Moria

So as we all know uruk-hai and black uruks are VERY powerful, and I think they are too powerful. Tolkiens gateway states "They were faster than normal Orcs and could travel during the day without being weakened. They were not only faster but smarter, stronger and larger, though most were still shorter than Men."

Usually shorter means not as strong, at least when it comes to orcs. (sry dwarves I didn't mean to insult you) Uruk-hai in the mod right now are usually more powerful then Elves, and that is not right. Elves should be the best Soldiers in middle earth not some orcs that are shorter on average to humans.

I just think that Uruks are a little too strong, Even if we don't change how strong the Uruk-hai are maybe make Snaga spawn more often compared to them, or something like that because walking into nan curunir is a death trap, and even rohan at night is probably not good Idea.

I totally agree, and maybe if/when they upgrade to 1.17. with the huge caves underground then there can be really cool structures