The Angmar Tower is a structure found in Angmar. Like the Mordor Tower it is a tall, multi-floored building with a spiral staircase leading to the roof, where you can recruit units. It is made of Angmar bricks and is similar to the Mordor Tower, but with Angmar Orcs instead of Mordor Orcs spawning around it. 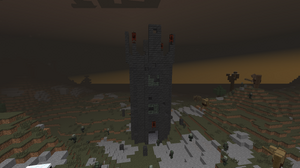 This building can only be found in the northern wasteland of Angmar, along with shrines, Warg pits and Orc camps.

The tower has a ruined nature to it, being made up of Angmar Brick (largely the ruined variant). It has a winding staircase up to its top, similar to many other towers in the mod, and each floor has four windows made of Orc steel bars.

The tower always has an Angmar Orc Chieftain at the top, from whom the troops of Angmar can be hired. Other Angmar mobs can be found inside, and around, the tower.

The Angmar tower has no chests for loot, and unlike the Mordor Tower it does not contain any Orc Bombs, meaning this tower is almost entirely useless to negative aligned Angmar players unless they came for bricks or bars.

Retrieved from "https://lotrminecraftmod.fandom.com/wiki/Angmar_Tower?oldid=608002"
Community content is available under CC-BY-SA unless otherwise noted.