Barrels are blocks used for brewing and storing all manner of drinks ranging from alcoholic beverages to herbal tinctures. They can also be used like a boat (this is a reference to The Hobbit).

Barrels can also be found in many structures, in which case they will already contain a certain drink. Examples for this are the Rohan mead halls, containing mead barrels, or Gondor fortresses, containing ale barrels. However, they most frequently appear in taverns, and in the beginning of the game, the first tavern you will find will be a Hobbit tavern.

Barrels can be crafted on a normal crafting table using six wood planks of any type on the top and bottom rows, an empty bucket in the centre, and two iron ingots in the two remaining slots.

A barrel can hold up to 16 servings of any kind of drink, but just one kind at a time. Empty barrels stack up to 64, filled barrels don't stack in the inventory.

If you click with an empty drinking vessel in hand on the front side (tap) of a filled barrel, you fill one serving from it into your vessel. Afterwards, you can enjoy your beverage.

If you click with a full vessel on the front side of an empty barrel, or of a barrel, that contains less than 16 servings of the same drink you are currently holding, the contents of the vessel will be added to the barrel.

You can poison the drink by right-clicking the barrel with a bottle of poison.

Since the Public Beta 8 update, barrels are needed to brew Middle-earth drinks and potions. For this, you will need three buckets of water and six other ingredients; more information on brewing can be found here.

Note that when broken while brewing, a barrel will pause, but not fully stop brewing; once placed again, it will resume.

Barrels can be placed in water by right-clicking the water with the barrel in hand. The barrel can then be ridden, similar to a boat, but it is a little slower and more difficult to control because it takes longer to respond to changes in direction. Barrels do not break when they hit the shore, but when broken with your hand or a tool, it drops itself as an item. As barrels do not break when they hit land like vanilla boats do, they make a sturdy and well-used alternative and are often regarded as superior to the vanilla boat in that regard. Note that a barrel is more difficult to navigate and has a larger turning radius than the boat.

Riding a barrel in the rivers of Mirkwood merits an achievement, "Out of bond". 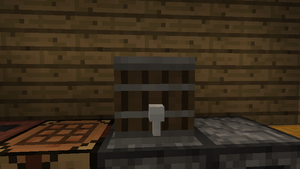 A barrel on top of a furnace. 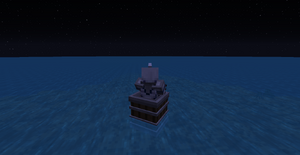 Riding a barrel on the sea.
Add a photo to this gallery