The Lord of the Rings Minecraft Mod Wiki
Register
Don't have an account?
Sign In
Advertisement
in: Blocks, Environment, Dirt

Edit
watch 02:40
World of Warcraft: Dragonflight - The Loop
Do you like this video?
Play Sound

The barren dirt block is used in mod generated roads throughout many of the regions of Middle-earth. It also generates as part of many biome poor soils, especially as part of forest floors, in the shade of the trees. Check the category page for more types of dirt.

The appearance is exactly the same as that of vanilla dirt blocks. The physical properties are also the same. In creative mode the barren dirt appears in the 4th slot of the standard blocks tab.

Barren dirt blocks can be obtained by shovelling them from roads or poor soils. They can also be created by using salt on dirt or grass.

They can also be crafted with dirt and gravel as shown below.

If you want to turn Barren Dirt back into normal dirt, all you need is to combine it with seeds on a vanilla crafting table. The recipe is shapeless.

Like normal dirt and podzol, the barren dirt blocks can also be used to craft dirt path blocks. 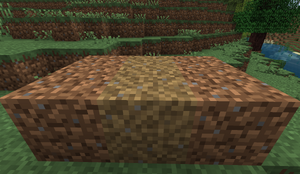 A comparison between dirt, dirt path, and barren dirt, respectively. 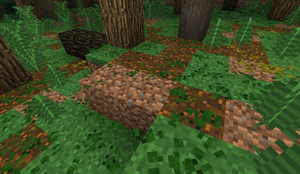 Barren dirt as part of a forest floor in Fangorn. 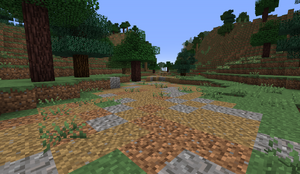 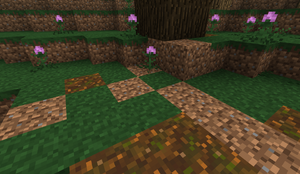 Barren dirt as part of a forest floor in the Old Forest.