The Lord of the Rings Minecraft Mod Wiki
Register
Don't have an account?
Sign In
Advertisement
in: Blocks, Plants, Environment,
and 11 more

Edit
watch 01:54
Arcane: League of Legends - The Loop
Do you like this video?
Play Sound

Berry bushes are a range of blocks that resemble leaves. They are found growing naturally in small groups in most biomes. You can obtain berries from a bush by right-clicking it or breaking it.

Currently there are 6 types of berries with their corresponding bushes: Raspberries, cranberries, blackberries, blueberries, elderberries and, since Public Beta 29, the poisonous wildberries.

If a berry bush has berries growing on it, you can obtain the berries by right-clicking on the block. This changes the block to a bare berry bush of the appropriate type which can then regrow berries over time, as detailed below.

Destroying the block also drops the berries in addition to a bare berry bush, which you can then pick up and move to somewhere more convenient.

Breaking a berry bush with a tool that has the 'silken' modifier will drop the bush with the berries still on it.

In either case, the number of berries dropped will range between 1 and 4.

Bone Meal can also be used to force the bush to regrow berries. This has a 33% chance of succeeding with each use.

It is not possible to produce more bushes from a single bush naturally, through bone meal or otherwise.

In Public Beta 25 the berry regrowth mechanics were bugged, and the berries regrew very slowly even on farmland. This was fixed in the Public Beta 26 update. 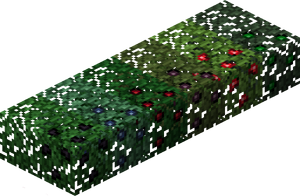 From left: blackberry, blueberry, cranberry, elderberry, raspberry and wildberry bushes, with their bare versions shown behind 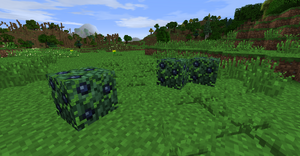