02:52
This feature is present in: Renewed only.

He gathered the huge pine-cones from the branches of the tree. Then he set one alight with bright blue fire, and threw it whizzing down among the circle of the wolves. It struck one on the back, and immediately his shaggy coat caught fire, and he was leaping to and fro yelping horribly. Then another came and another, one in blue flames, one in red, another in green. They burst on the ground in the middle of the circle and went off in coloured sparks and smoke.Out of the Frying-Pan into the Fire

Blue Vitriol is a material added to the Renewed version of the mod which enables players to create soul fire in Middle-earth.

Blue vitriol may be made in either a Dwarven or Orc Forge. Simply place copper (ore or ingots) in the upper slots and Sulfur in the lower and add fuel.

To create soul fire with blue vitriol, drop a piece into a lit hearth block and the flames will turn blue. Note that only hearth blocks work for this transformation; throwing this material into any other fire will simply destroy it like any other item.

Blue vitriol is an archaic name for copper (II) sulphate, which burns with a green-blue flame and can be made by heating copper with sulphuric acid. It therefore gives a way to produce the aesthetically pleasing 'soul fire' from vanilla Minecraft but with a scientific explanation that means it fits in Middle-earth. 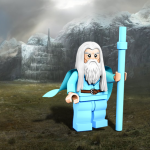