The Lord of the Rings Minecraft Mod Wiki
Register
Don't have an account?
Sign In
Advertisement
in: Renewed feature, Plants, Environment,
and 4 more

Bluebell is a common flower found in the temperate biomes of Middle-earth. It can be crafted into a dye known as "bluebell blue." Bluebells spawn in small groups of 5-15 individual flowers.

These flowers exist in the real world, too, where it can be found flourishing in gardens near the Atlantic ocean. The proper, formal name for bluebell is "Hyacinthoides non-scripta". 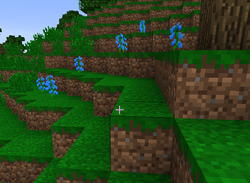 Bluebell can be crafted in a regular crafting table into a unique dye called "bluebell blue" that is similar in colour to the vanilla blue dye. The recipe is as follows.