The Lord of the Rings Minecraft Mod Wiki
Register
Don't have an account?
Sign In
Advertisement
in: Renewed feature, Items, Vanilla Items,
and 5 more

All seven bones currently in the mod.

This page describes all types of bones present in Middle-earth. Bones are one of the few NPC drops that can easily be obtained, regardless of your alignment.

Hobbits are peaceful folk, often ill equipped to handle an attack by the forces of darkness. As The Shire is the spawning grounds for new players on single player servers, players wishing to walk the evil path have a relatively easy job of slaughtering these peaceful hobbits. In doing so, they often obtain large amounts of this material which can be sold to some traders and thus provides a wealth of income for these players.

All players can easily collect hobbit bones by walking the rim of the Old Forest. Evil dark huorns sometimes wander into Buckland, and hobbits often enter the forest only to get killed there. But watch out, huorns move quick, hit hard and sometimes hunt in packs for the unwary bone collector.

The Dwarf bone has more or less the same appearance as human bones, but are just a little shorter, making them much easier to distinguish in your inventory slots. They are obtained by killing Dwarves.

Orc bones are common drops from all races of Orcs. They are twisted and altogether unpleasant to look at, as is fitting when you consider from where you got them. If you kill many Orcs, you will likely aquire many of these (as well as a hefty sum of rotten flesh) and perhaps some rarer drops too. Of course, you could simply put them in item frames and hang them on your wall to show your guests just how many of Sauron's servants you've killed. (You may need a very long hall!)

The regular bone from vanilla Minecraft is also present in Middle-earth. It can be obtained by slaying any kind of Man, both good or evil. Thus, you can obtain bones by slaying Rohirrim, Rangers of the North, Rangers of Ithilien, Dunlendings, Gondorians, Southrons, Morwaith, or bandits. About 50% of all humans will drop a bone when slain. Sometimes, you can find them in the chests of structures such as Rohan barrows, Gundabad Orc camps, and Uruk camps.

The Elf bone is the most common drop of the Elves, and can be used for most of the things that other bones can be used for. It is noticeably whiter than the other bone types. High Elves, Galadhrim Elves, Wood-elves and Tormented Elves, when killed, will often drop an Elf bone. You can also find elf bones in several Elven structures, including underwater ruins, ruined towers, and others.

The Warg bone is a type of bone dropped by all types of Wargs upon death. It can also be found sometimes in several Orcish structures.

The Troll bone is one of the many things you get when you kill trolls, Olog-hai and Half-trolls. The only way to get these bones is by killing any type of Troll, as a common drop or finding it in a pouch or chest. Like some pieces of equipment, the troll bone has a 'large' texture, which is used when it is held by the player. This makes them look very large in hand.

The skeleton is not really a bone, but a structure made out of bone blocks. It can be found in the south. A complete sekelton can hold up to 121 blocks, which can be broken into 968 bonemeal, but not in bones of any kind.

Note that trading is not yet present in the renewed version.

For a long time, vanilla bones were the only kind of bones that can be used to tame wolves, but this was changed in Public Beta 27.1, and now wolves are not picky in regard to which bones they're given.

Bones are also used to activate Morgul portals. Just throw in any kind of bone after finishing the build.

Bones are used to summon the Hill-troll chieftain. Just click the totem statue with any type of bone.

Bones are used in brewing Orc and Morgul draughts and preparing Torog Stew. 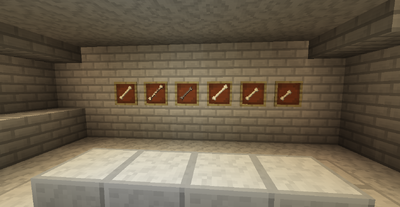 Nearly all types of bones in Middle-earth (troll is missing).
Community content is available under CC-BY-SA unless otherwise noted.
Advertisement