The Lord of the Rings Minecraft Mod Wiki
Register
Don't have an account?
Sign In
Advertisement
in: Renewed feature, Plants, Environment

Category page
Edit
This feature is present in: Renewed, Legacy.

A tree is a common type of generated structure in the realm of Middle-earth. Some species of tree are inventions of Tolkien's (such as Mallorn and Lebethron) and the rest exist in our world. In total, there are more than 40 species of trees that you can find in Middle-earth.

All of the trees have their own wood types, saplings, leaves and fallen leaves to make forests as detailed and realistic as possible. Many of the trees are different shapes and sizes when compared to the 'normal' trees that you'll find in Vanilla Minecraft, which also makes them more real. In addition, you can find rotten logs in many forests. There are also fruit trees added by the mod, which have a good chance of dropping various fruits when their leaves are destroyed, or when they decay naturally.

Note that not every tree you come across in certain forests is actually a tree...

Note that all fruit tree leaves have a chance of dropping their respective fruits when they decay or are broken by the player.

Trees invented by the Mod team[]

Real trees added by the Mod[]

Tree variants added by the Mod[]

Only the large and the party variants of the following tree species can be grown from saplings:

Named after the large party tree located near Bag End in Hobbiton, where Bilbo made his last speech prior to leaving for Rivendell, the mod's party trees spawn in most regions, especially in "forest" and "forest_dense" variants. For those who wish to grow their own party tree, they can do so using 9 saplings planted in a 3*3 grid by right-clicking the central sapling with bone meal. Be careful not to get entangled by the fast growing roots that will support these trees!

If you are not sure if a really large tree variant can be grown, just try to plant saplings in a 2x2, 3x3, 4x4, and 5x5 pattern and put some bone meal on one of them. Then check the trunk size above the roots. That's the biggest size you can grow it. Note: Some of the most massive trees (like Mellyrn 5x5 for example) need a special procedure to be grown. This should be included on the page of that tree.

Party trees were added to Renewed in Renewed Snapshot 5.3. They were given improved generation to look more realistic and also spawn in more biomes than in the Legacy version. 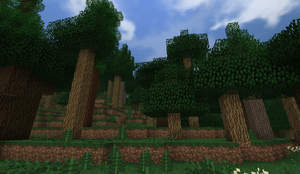 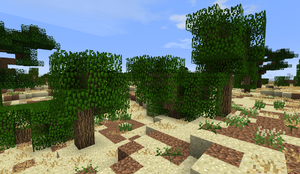 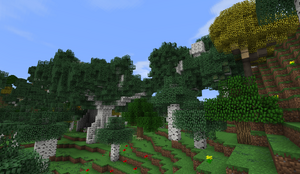 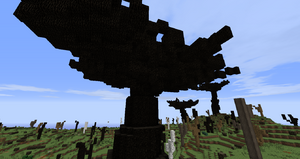 Fangorn wasteland can be a good source for charred wood.
Trending pages