The Lord of the Rings Minecraft Mod Wiki
Register
Don't have an account?
Sign In
Advertisement
in: Conquest, Gameplay

Conquest is a gameplay mechanic which allows the player to conquer territory for their pledged faction, or the faction's allies, by slaying the NPCs of enemy factions. This means frequency of enemy NPCs spawning in conquered territory may be reduced, and that of the conquering faction or an allied faction may be increased, even if those NPCs don't normally spawn there. Conquest can also unlock enemy default waypoints for fast travel if it is above 500 points in the tile that contains the waypoint.

Conquest is disabled in M.E. Classic mode due to the lack of a map. 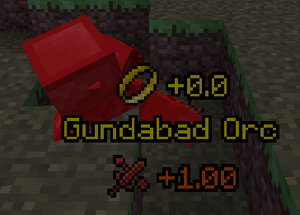 In order to conquer territory, you must first earn at least +100.0 alignment with a faction and pledge allegiance to them.

For each enemy of the chosen faction you kill, you will now be shown two numbers. One for the alignment (gold ring), and one for the conquest (crossed weapons). The picture to the left shows the slaying of a Gundabad Orc in the Lone-lands while pledged to the Blue Mountains. This earns you +0.0 alignment (outside the Area of Influence), but +1.0 conquest points. NPC's of the faction you pledged for start spawning when you have 200+ conquest points in the same area.

In Update 36 a conquest bonus was added for defeating an invasion. 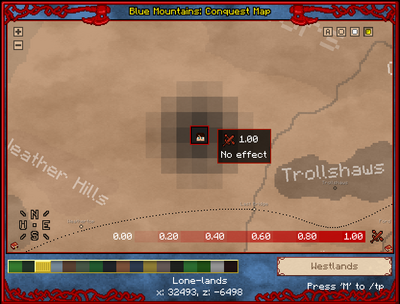 If you place a Table of Command and right-click it, the conquest map will appear. The map is divided into squares of 1024x1024 blocks (64x64 chunks).

Each square has a conquest counter for each faction, which is now +1.0 for the Blue Mountains in the example, gradually decreasing from the centre square to the adjacent squares further out.

The grey colour indicates that the conquest has no effect on spawn rates in this location, so it's wasted effort to kill enemies in this case.

You can use the slider and the category button below the map to select another faction. As you gain conquest points, the scale at the bottom of the map adapts to this fact. The darkest colours shown on the map always indicate the highest value shown there. 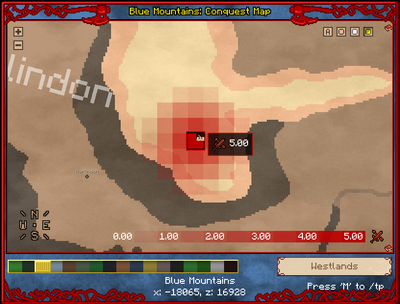 If you slay enemies on your own territory (Blue Mountains in the example) , you'll get red coloured squares. Each kill increases the conquest. The red squares indicate an increase of the spawn rates for your own faction. 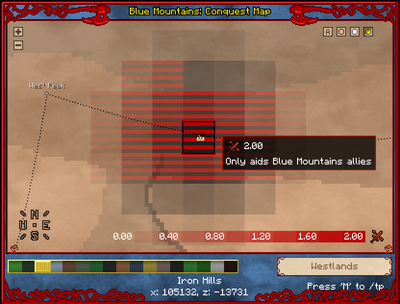 If you slay enemies on the territory of your allies (Iron Hills in the example), you'll get striped squares. Each kill increases the numbers. The colour of the squares indicate a spawn benefit for an allied faction.

Please note, that in the picture to the left, the top and bottom squares are grey, because those are completely outside the Iron Hills.

If you have hired some friends, they will not grant you alignment, but they will, however, grant you some conquest, at the rate of 1/4 the conquest you would earn if you were to kill the units yourself.

Conquest decay begins only after there have been no changes in that square for one hour. It then decreases by about one point every hour. In order to keep up high rates, you need to keep on fighting enemies in the desired region.

The following commands can be used to set conquest rates:

Change conquest points for one faction at a certain location.

Clears the conquest points for all factions at a certain location in a single square. [x] [z] are the map coordinates and can be left out.

This is part of the gameplay section and enables/disables the complete conquest system.

This is part of the GUI section and decides whether map labels are shown on the table of command or not.