The Lord of the Rings Minecraft Mod Wiki
Register
Don't have an account?
Sign In
Advertisement
in: Biomes, Environment

The Corsair Coasts in Far Harad.

The Corsair Coasts in Far Harad.

The Corsair Coasts are rocky cliffs on the western edge of Far Harad. These jagged, broken cliffs are composed primarily of a mix of dirt, stone, clay, sand, sandstone, and occasional patches of grass, dotted by palm trees and cut through by a multitude of small streams. The coasts are hardly fit for large-scale settlement, but the labyrinthine nature of the biome makes it ideal for small hideouts, which the Corsairs of Umbar have taken full advantage of.

This biome is fairly picturesque, but it's nonetheless quite dangerous. The rough landscape means that a sharp drop can open up right at your feet if you're not careful, and travelers should also beware of crocodiles and bandits. The Corsairs make this biome even more dangerous for the enemies of Umbar, though the treasures they store here usually make it worth visiting.

The Coasts are dotted with structures belonging to the Corsairs of Umbar, who use their bases here to store treasures and to serve as staging ground for raids into Far Harad. Long ago, the Black Númenóreans used the coasts for the same purpose, but no structures of theirs remain.

This biome is inhabited by the corsairs, their slaves, and all exotic animals of Far Harad except for dik-diks. Caused by the abundance of small streams and ponds, crocodiles are quite common here.

As with every biome in Far Harad except Perdorogwaith, the Corsair Coasts generate gemstones at a slightly higher rate than most biomes, akin to the rates at which they can be found in most mountain foothills, together with all of the usual ores.

Due to the rocky nature of the biome, the Corsair Coasts are mostly devoid of vegetation. However, there are patches of grass and fertile soil, meaning that oak, palm, and acacia trees can sometimes be found here, along with stubby grass and similar plants. 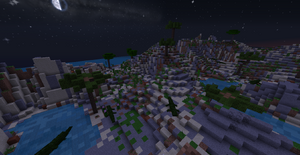 The Coasts at night are teeming with crocodiles. 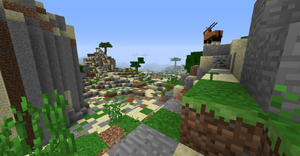 Even a gemsbok would have trouble with some of the Coasts' cliffs. 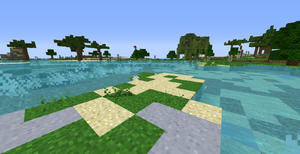 Nice eyots in the streams of the Coasts provide a place to rest, at least during the day.
Community content is available under CC-BY-SA unless otherwise noted.
Advertisement