The Lord of the Rings Minecraft Mod Wiki
Register
Don't have an account?
Sign In
Advertisement
in: Renewed feature, Biomes, Men,
and 3 more

The fells of Dunland, home of the wild hill-folk.

The fells of Dunland, home of the wild hill-folk.

This article is about the biome. For the faction see here.

Dunland is home to the oldest enemies of Rohan, whom they call the Dunlendings, who, after they were driven out of their old home in Calenardhon, now reside in Dunland alongside the former residents of the Enedwaith, who migrated eastward. The landscape is dominated by rolling hills, long stretched valleys and many evergreen trees. Stone boulders dot the area. Dunland is located along the southwestern part of the Hithaeglir. It's enclosed by the vast and sparsely populated Enedwaith, the Misty Mountains and bordered by the Isen river to the south.

Houses, taverns, forts, and campfires can be found throughout this biome. The Dunland Woodlands sub-biome contains more trees and has lower spawn rates for the Dunlendings who defend it.

Upon entering Dunland you gain the achievement: "Land of the Wild Men".

Dunlendings spawn here day and night. Orcs do not. Crebain, large black crows used as spies by Saruman, fly around the air here.

Dunland can be conquered by Dunland, Rohan, Dúnedain of the North, Isengard and Gundabad. The conquest rate is 0.5.

Dunland is generally a temperate coniferous forest, with even denser forests covering its hills. The dominate species are the evergreen conifers spruce, fir and pine. Along with these, and much less common, tall and large oaks and chestnut trees can be found in its woods, making the wood supply of the Dunlendings large. The soil doesn't seem to favour lush flower growth, which may explain the habit of the Dunlending women to wear flowers in their hair. Tall grass growth is generally average. 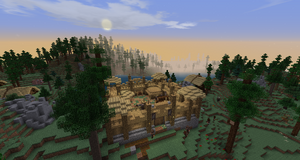 Dunland Hill Fort and lake in the background in the sunset. 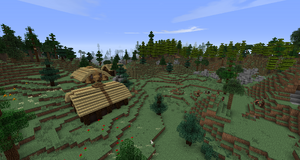 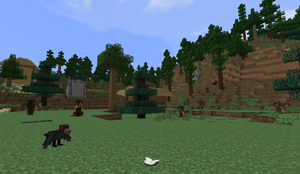 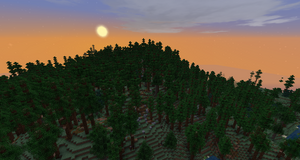 A pine forest in the sunset.
Community content is available under CC-BY-SA unless otherwise noted.
Advertisement