The Lord of the Rings Minecraft Mod Wiki
Register
Don't have an account?
Sign In
Advertisement
in: Men, Weapons, Weak Melee Weapons,
and 6 more

There is not much Dunlending equipment included in the mod. The Dunlendings mostly use stone and iron tools or weapons. But there are two special weapons, that can only be crafted on the Dunlending crafting table using wood and iron ingots.

Both crafting recipes use a Dunlending crafting table. The club is crafted with three planks of any kind in a vertical formation. The Trident is crafted like an iron pike.

A crude and cheap melee weapon, with low attack speed, and regular reach. The only advantages are an increased knockback and an impressive look. In the code, the Dunlending club is defined as a warhammer, since it is used in a similar manner.

A Dunlending Trident is a three-pronged melee weapon sometimes wielded by Dunlendings. It inflicts +6 attack damage and has an extra reach modifier that gives it a reach similar to that of a spear.

In addition, the player can use it to catch fish. In order to fish with it, you must right-click and then release on a body of water, and sooner or later you will catch a fish. Doing this successfully earns you the achievement "Catch of the Day". Note that every attempt to catch a fish counts as a use on the trident's durability. As the trident uses less of its durability per use than a vanilla fishing rod, it is a long-lasting variant and can therefore be considered more useful.

In the past (before Public Beta 24) the trident was also able to pick up junk and treasure items similarity to a fishing rod but this has been removed. It was also faster before, as simply pressing an holding the right-click button was enough to catch something. It was changed because it was seen as too easy to obtain treasure this way, notably enchanted books.

As said above, it is no longer possible to catch magic items with it. But you can enchant a trident by combining it with magic books in an anvil or putting it into an enchantment table. Unfortunately, you can only put the normal weapon enchants on it, and not the fishing enchants. You can also put the mod's modifiers on it, most of which offer the same abilities as the vanilla enchants. 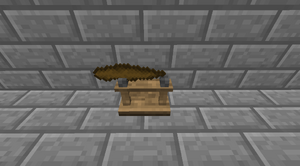 A Dunlending club on a Weapon Rack 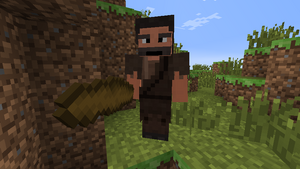 A Dunlending wielding a club 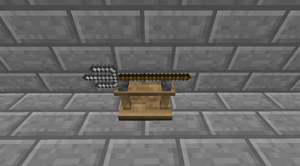 A Dunlending trident on a Weapon Rack 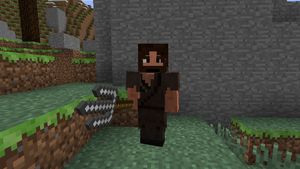 A Dunlending wielding a trident
Community content is available under CC-BY-SA unless otherwise noted.
Advertisement