The Lord of the Rings Minecraft Mod Wiki
Register
Don't have an account?
Sign In
Advertisement
in: Dwarves, Iron Hills, Blocks, Good

Edit
watch 02:30
Dead Cells Final DLC - The Loop
Do you like this video?
Play Sound

Dwarven doors are mostly invisible to the eye. No mobs can open nor close this door, making it a safer option if one's base is in a region with which their alignment is negative.

In some ways the name door can be misleading as they act more like the many gates added by the mod. This is obvious in the way they open and close. However, the main difference is that they are visibly a full block thick: normal gates appear much thinner.

Since Public Beta 30 there are two variants of Dwarven doors: The normal and the ithildin door. Both look exactly like regular grey stone blocks at day, the normal variant still does at night. Only the ithildin variant will become visible when the player is within eleven blocks from the door (at night of course).

Dwarven doors spawn naturally in the Iron Hills and Blue Mountains as an entrance to a Dwarven house. Opening a Dwarven door gives the achievement "'Mellon!'". They cannot be opened by any mob.

Ithildin Dwarven doors can built in any size, they also connect to the normal variant, and open as a whole, but certain sizes connect visually to a larger door. If you destroy one block of a bigger door, the rest collapses to the 1x1 variant. If you replace the block, the door should reconnect to the larger variant again. If it doesn't the way you want it, it might be necessary to break and replace some blocks.

Normal doors can be crafted on the Dwarven crafting table or the Blue Mountains crafting table by putting six stone blocks in a 2x3 vertical rectangle.

For the ithildin variant, one stone block is replaced:

As Dwarven doors use up 5 or 6 stone blocks each, using them to build larger walls is rather inefficient.

Before Public Beta 30, Dwarven doors were crafted just like wooden doors, but on Dwarven tables. They also worked in exactly the same way as those. Only the ithildin variant 1x2 existed. The visibility range was lower (only seven blocks). Their texture was slightly lighter than normal stone, if a torch was put behind it. That way, it could easily be spotted at day. Check gallery pictures for that. 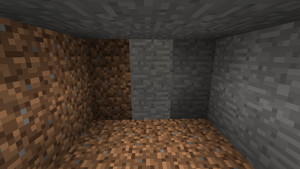 This is how Dwarven doors looked before Public Beta 30 at day. 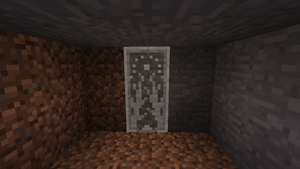 The same door at night. 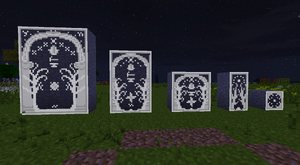 All ithildin doors as seen in Public Beta 30.