The Lord of the Rings Minecraft Mod Wiki
Register
Don't have an account?
Sign In
Advertisement
in: Renewed feature, Materials, Items,
and 10 more

Edhelvir is a blue crystal attained by mining Edhelvir ore, which is found in Lothlórien, Lindon and Rivendell. In the renewed version only it can also be found as a crystal block.

In the renewed version only, Edhelvir can also be found as Crystals.

Nine Edhelvir can be crafted from a block of Edhelvir.

These crystals can be crafted into High Elven torches using the recipe shown below. Right-clicking on a grass block while holding one makes Elvengrass, from which Elven portals and giant Mellyrn can be made. For this to work you either need 1 High elven or 1 Lothlórien alignment. If alloyed with iron in a Dwarven forge it makes a Galvorn ingot. Edhelvir can also be stored in blocks just like ingots can. These are crafted by putting nine of them in a 3x3 formation on a vanilla crafting table. 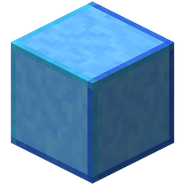