The Lord of the Rings Minecraft Mod Wiki
Register
Don't have an account?
Sign In
Advertisement
in: Renewed feature, Bricks, Elves,
and 10 more

Elven bricks are a range of brick types used by the Elves. They look similar to stone bricks, but they have either a more creamy shade of silver/grey, a more golden hue, or a slightly brown appearance, depending on the type (High Elven, Galadhrim or Wood-elven repectively). All three variants have all of the different types of block (stairs, slabs, walls, cracked, etc.).

Elven bricks are essential in the crafting of Elven forges.

The recipe for Elven bricks is the same as that of regular stone bricks (requires four stone), but you will need to do it on a Galadhrim, Wood-elven, Lindon or Rivendell crafting table. They are crafted in batches of four, as with most bricks.

The recipes for crafting Elven brick walls, slabs, and stairs are the same as the stone brick recipes in vanilla Minecraft, but are done with the respective bricks on the appropriate crafting table. You can also craft pillars out of stone blocks.

If you put four Elven bricks of the same variant in a square on their respective crafting table, you will be able to craft one respective carved Elven brick, which only gives one single block, similar to the carved Dwarven bricks.

If you smelt Elven bricks in any type of forge, you'll get the respective cracked variant out of it. You can then craft walls, slabs, and stairs out of it. This was probably included into the mod in Public Beta 25.

As of Public Beta 26 Elven bricks can also be trimmed in the same way as Dwarven bricks. Just put four silver or gold nuggets around any of the three variants. Note that only Dwarves know how to trim with Mithril.

As of Public Beta 25 Elven bricks can also be overgrown by vines. Just put one vine and one of the three variants in the respective crafting table.

Below is a picture of all Elven bricks and their variants. Pillars, walls, slabs and stairs are not included to keep it concise and simple. 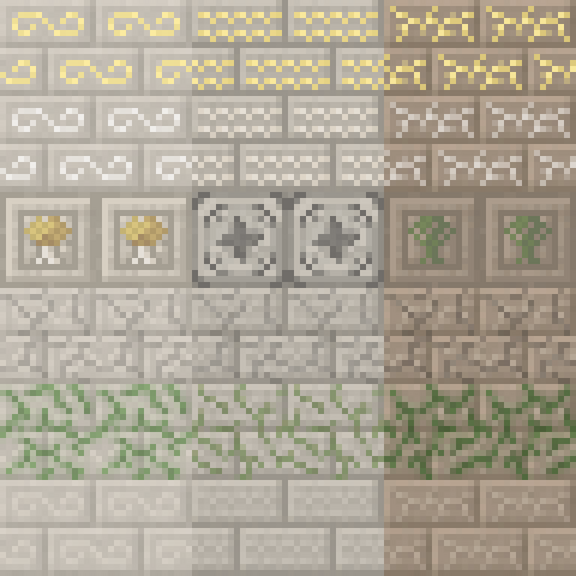