The Lord of the Rings Minecraft Mod Wiki
Register
Don't have an account?
Sign In
Advertisement
in: Harad, Far Harad, Biomes, Environment

The Grasslands of Far Harad.

The Grasslands of Far Harad.

The Far Harad Grasslands is a biome which covers large portions of Far Harad. It dominates the northern regions of Far Harad, stretching from the river Harlanhir on the borders of Near Harad to the edges of the Great Jungle. It is a vast land of wide grass plains, which are occasionally broken up by tropical rivers, forests, boulders, and patches of red clay. The Morwaith, a race of fierce hunters allied with Sauron, live here amongst a whole host of exotic animals, and they will gladly defend the Grasslands against invaders. The northern reaches of the grasslands are somewhat drier as one approaches the Great Desert, while the central and southern regions are wetter as one approaches the Jungle.

Far Harad has a year-round tropical climate, and thus the flora and fauna of the Grasslands differ significantly from other areas of Middle-Earth. Classic Vanilla animals, as well as creatures commonly found in northern Middle-Earth like the Bear, Aurochs or Wild Boar, are nowhere to be found here. Instead, the land is full of more exotic African-type animals, most of which were imported from the Lion King Mod. In addition, while oak trees are still fairly common here, they share their dominance of the region with more exotic acacia trees, as well as Baobab trees, which are unique in their own right. The standard Grasslands biome has its own Baobab Forest variant, which generates forests dominated by the tall, thick-trunked trees.

The Far Harad Grasslands are unique in that they have an additional layer of biome variants. All sub-biomes of the Far Harad Grasslands, including the standard one, will either be populated or unpopulated, which is decided randomly. Neither variant has any sort of effect on the terrain or coloration of the biome, and the tags instead dictate what structures generate and what NPCs spawn there.

Upon entering this biome, the player earns the achievement "Where the Stars are Strange". 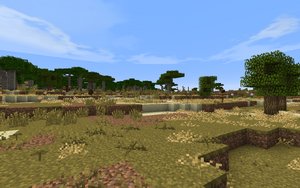 The Arid Grasslands are the northernmost biome in Far Harad. This is the closest region to the Great Desert and it thus resembles the Sahel in Africa, which abuts the Sahara desert. The Arid Grasslands have less fertile soil than the wetter lands to the south, and the region is theoretically prone to desertification. This biome provides a smooth transition from the drier Half-Deserts to the wetter grasslands to the south. Patches of sand, dirt, dry grass, and red clay are common here, trees are rarer and more stunted, and the grass itself is much less green. Some forest regions, however, do occur. Spawning here is toned down from the standard Grasslands variant, both for the animals and especially for the Morwaith themselves. Populated regions are rarer in this sub-biome than they are in the Grasslands proper. In addition to dominating the northern regions of Far Harad, the Arid Grasslands are also present surrounding the volcanoes in central Far Harad.

The Arid Hills sub-biome represents the Emyn Haecharad, a range of hills that arcs southeast across the western part of the Arid Grasslands. It is virtually identical to the Arid Grasslands, except the terrain is much hillier, and in some places it even becomes mountain-like. 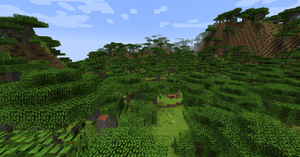 The Far Harad Forest biome generates in a large patch around the southernmost of the Great Lakes of the eastern Grasslands, and it can also be encountered as a randomly-generating sub-biome in other parts of the Grasslands as well. The sub-biome is dominated by acacia trees, many of which have vines growing on them, though stunted oaks, baobab trees, and fruit trees can be found here as well, as can rotting logs. Birds are common here. The grass is far greener in these forested areas and they seem wetter in general than the regular grasslands.

The Far Harad Forest has its own dedicated clearing variant. Once, the whole region was dominated by the Taurethrim of the Empire of Kimen Kâh, but they were wiped out by the Half-Trolls thousands of years ago, and the former heartland of their empire has become the Taur-i-Thorogrim, a forest region that borders this biome.

The Grasslands of Far Harad are dotted with the structures of the Morwaith, and, rarely, stone ruins from the age of the Taurethrim Empire can be found here as well. It is also said that there is a mysterious structure of unknown origin hidden deep in the biome, but this may merely be rumour.

The Grasslands of Far Harad are populated by a wide variety of unusual animals, as well as by the Morwaith, a race of Far Haradrim.

Far Harad Grasslands can be conquered by Morwaith, Taurethrim, Near Harad, Half-trolls, Gondor and Mordor. The conquest rate is 1.0.

As with every biome in Far Harad except Perdorogwaith, the Grasslands generate gemstones at a slightly higher rate than most biomes, akin to the rates at which they can be found in most mountain foothills, together with all of the usual ores. Miners will often also encounter veins of red clay underground, similarly to how veins of dirt and gravel can be found everywhere else.

For the most part, the Grasslands are very similar to a less-wooded version of the vanilla savannah biome, consisting primarily of wide grassy plains. Harad flowers can be found fairly commonly here, as can patches of melons and wild yams. Occasionally, the grass is broken up by patches of red clay.

Trees are sparse in the standard variant of the Grasslands biome, and even more so in the Arid Grasslands and Arid Hills sub-biomes. Forest variants and the Far Harad Forest sub-biome have denser tree coverage, however, and the Forest even has vines growing on some of the trees there. All trees in the Grasslands are a mix of stunted oaks, acacia trees, and Baobab trees, with fruit trees mixed in in the forests and along rivers. 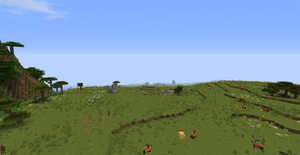 The vast grasslands of Far Harad. 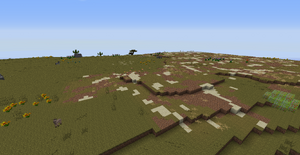 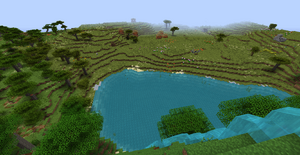 A waterfall, with camps in the distance. 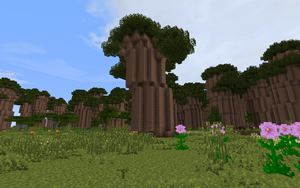 At the edge of the Baobab Forest. 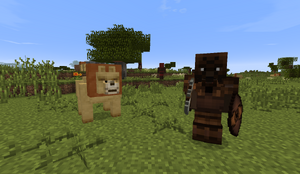 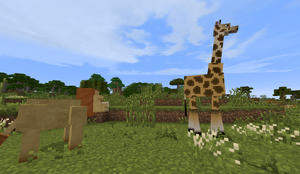 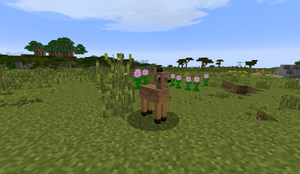 Hard to approach: A dik-dik in the grasslands. 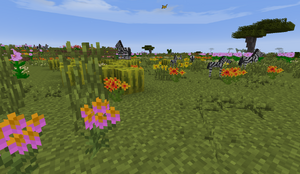 Flowers in the grasslands. 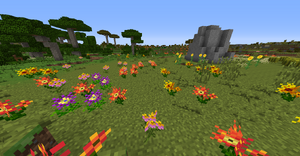 Grasslands variant with an abundance of flowers. 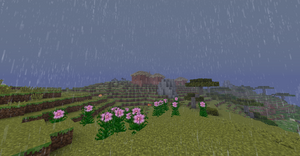 It even rains in the grasslands. 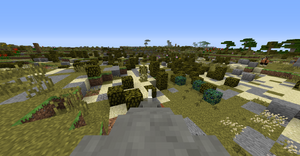 Riding a rhino through the scrubland. 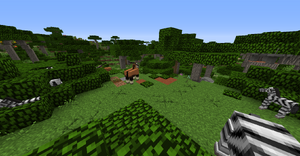 Wildlife in the oak scrubland.

The forest from above... 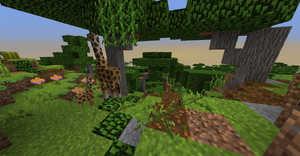 ... and below (including giraffes). 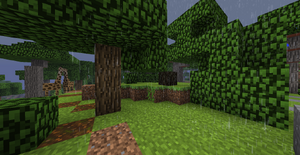 A herd of giraffes seeking shelter from the rain in the forest. 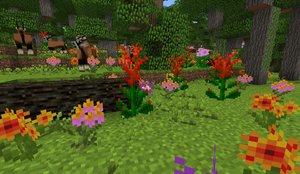 Flowers in the forest. 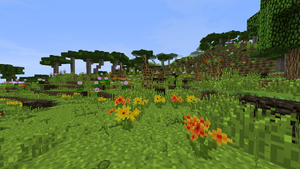 A herd of giraffes grazing on a clearing. 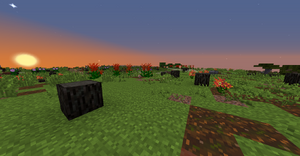 Sunrise on a clearing. 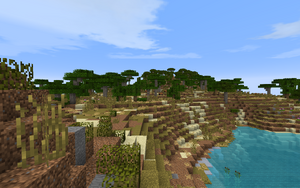 A lake in the arid grasslands. 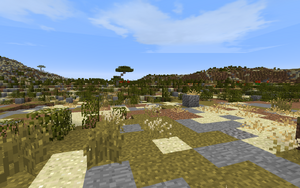 The hills of the arid grasslands. 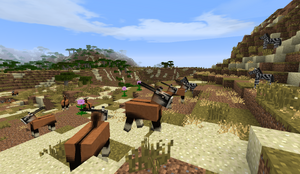 Wildlife in the arid hills. 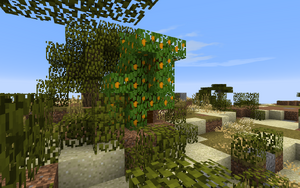