The Lord of the Rings Minecraft Mod Wiki
Register
Don't have an account?
Sign In
Advertisement
in: Renewed feature, Gameplay, Biomes
English

The fast travel system is a convenient method of transport which allows the player to travel large distances across the Middle-earth map without having to walk, ride, or sail through the space between.

A full interactive map of the Mod is also available in this page.

The system was first added to the Mod in Public Beta 14, shortly after the release of Middle-earth terrain generation, and has been altered several times since.

There are fast travel waypoints all across the map of Middle-earth allowing access to most regions. However, the waypoints must be activated first. To activate a waypoint, simply enter the region in which it is located. Upon entering a region, all the waypoints within will become available for use. For some waypoints you also need to have a certain alignment; for example, waypoints in Mordor are not available for players with negative Mordor alignment to use, even after travelling to Mordor.

There is also a cooldown period between use of fast travel, currently set at 30 minutes by default, but can be changed if you have access to cheats or commands. Each waypoint has its own cooldown (that is counted up to from 0) which increases progressively with distance (although there is a large area that remains at 30 minutes) and decreases with subsequent uses. The more you use a particular waypoint, the shorter the cooldown time for that waypoint becomes, until it reaches 10% of the default setting. For example, if the fast travel cooldown time is 20 minutes and you go to the High Pass waypoint 5 times, the cooldown for it may decrease to 15 minutes. This fast travel timer continues at a tenth of its normal speed for offline players on multiplayer servers.

When fast travelling, all your nearby hired units (except those which are halted or guarding) will come with you, and if you are riding a mount, that will be transported as well. You have to be riding the mount if you want it to be transported - nearby mounts which are not being ridden will not come along! You can also fast travel with animals on leads.

Starting Out With Fast Travel[]

If enabled (see below), the fast travel system is available instantly upon entering Middle-earth. Combine this with the fact that the Shire has a waypoint (Sarn Ford) located right on its border, and you can use fast travel to be well on your way into the heart of Middle-earth in just a couple of minutes.

Players often complain that it takes ages to get out of the Shire biome. Notwithstanding the point that the Shire is one of the most feature-packed biomes in Middle-earth, this is not a valid complaint, for two reasons: Firstly, the journey can be made in well under 20 minutes with adequate food supplies - and secondly, thanks to fast travel, you can get out almost straight away!

The best strategy is to fast travel as near to a region border as possible (e.g. Sarn Ford for the Shire), then move across the border to unlock some new waypoints (possibly use a mount). Repeat this over and over until you reach your desired destination. Some regions (like the Great Desert) are huge and still need a lot of effort and multiple ingame days to cross, even with this strategy. In this case, set some intermediate custom waypoints to prevent having to start all over in case you die. 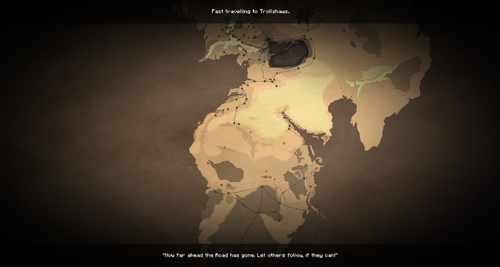 A loading screen when fast travelling from Far Harad to the Trollshaws. 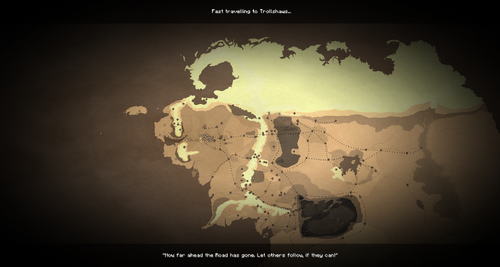 The fast travel screen zooming in on its final destination.

The fast travel screen features an animation of the map, smoothly zooming from your origin to intended destination and a nice quote from the books to pass the time!

allows the player to change the time since they last fast travelled, either in seconds or to its max value (i.e. they will be able to fast travel immediately).

allows the player to set the default minimum and maximum times they have to wait after fast travelling, in seconds.

allows the player to lock or unlock the different fast travel points on the map, as they would be locked for unexplored regions by default in survival mode.

If set to false, no fast travelling is possible. Players trying to do so will get an error message.

When commands for a world are available, it is possible to use the map screen to teleport to any point on the map. Note that this is not actual 'fast travel', it is simply a more user friendly way of using an ordinary /tp command and therefore it has none of the benefits of fast travel (i.e. mount and hired troop transport), and it also has no effect on fast travel cooldown times.

To use this, just hold the cursor at your desired position at the map and press 'M' (default-key). There is also a help text for this function under the map.

In the renewed version, the default map teleport key is 'Enter' due to 'M' being used for the map.

This command let you change the time until the next fast travel is available to another value. The value is measured in ticks (1/20 sec.). The player argument is optional and allows you to set the timer of someone else.


This command let you determine the default cooldown for the fast travel system. The value is measured in ticks (1/20 sec.). This setting was global, meaning it affected all players. This command was useful to set the cooldown when starting a new world so that you don't have to mind /fastTravelTimer in the game. You could also disable the cooldown by setting it to 0.