The Lord of the Rings Minecraft Mod Wiki
Register
Don't have an account?
Sign In
Advertisement
in: Renewed feature, Blocks, Utilities, Gameplay

Edit
watch 02:46
The Quarry - The Loop
Do you like this video?
Play Sound
This feature is present in: Renewed, Legacy.

One block of each gate side by side.

Gates are blocks that can be used like doors. There are many different types of gates for many different factions, and some plain ones, like wood, iron and bronze. Gates are basically huge doors, but, unlike doors, NPCs cannot open them.

Note that renewed has all of the gates except the Rhûnic and Taurethrim ones, with the wooden portcullis having its own new 3D model. They are also all able to be waterlogged.

Gates, like doors, can also be opened when a Redstone signal is applied to them. However, gates are different than doors in one large way. They are placed as one block, and can be expanded upon to create massive doors. There is no known limit to how large a gate can be, however a gate will only open in a 16 block radius from where you click on it or where a Redstone signal is applied.

A gate cannot be opened when holding any kind of gate block, or any type of ranged weapons. This is nice for building large gates in precarious places. Also, gates of any kind (see below) will mesh with each other to become one large gate, instead of two small ones.

One block gates can be used as arrow slits/doors. Placing gates from above results in trapdoors useful for murder holes and traps.

There are 20 different types of gates (if you count the Hobbit gates as one), shown in the chart below. The images show a 3x2 blocks sample. To craft a gate, you always need gate gears in the centre and 8 other items around it of various material as shown in the list: 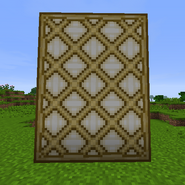 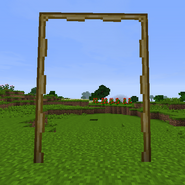