The Lord of the Rings Minecraft Mod Wiki
Register
Don't have an account?
Sign In
Advertisement
in: Renewed feature, NPC, Gondor,
and 9 more

Gondor Archers are similar to Gondor soldiers, except that instead of using a sword or other melee weapon, they use a bow and arrows. Just like all Gondor Soldiers, they will attack evil creatures on sight, and can drop some of their worn equipment on occasion.

Gondor archers can spawn anywhere Gondor soldiers spawn, however they are slightly rarer. They cannot spawn mounted as of Public Beta 28.

Like most ranged units in the mod, Gondor archers will see foes from up to 16 blocks away, and they will walk to within 10 blocks of the offending player or NPC and start shooting at it. As with most of the mod's NPC's that use bows, they will carry their bows by their sides when idle, and raise them into a firing position when provoked.

In the renewed version, like other archers, these troops can switch to a Gondorian dagger at close range and their arrows can pass through allies instead of bouncing off.

Evil players may kill Gondorians to acquire bones. The Men may also rarely drop their equipped armour or weapons.

You can hire these units for a price of 50-100 silver coins from a Gondorian captain in a Gondor fortress, provided your alignment is at least +300 with Gondor. Alternatively, these archers are hireable from Lebennin Levymasters in Lebennin watchforts and fortresses at the same price for only +250 Gondor alignment. As per usual, cost decreases as alignment increases. Gondor archers are relatively cheap and require less alignment than Galadhrim Elf warriors, but they still have a powerful ranged attack, making them a good choice for good players early on in the game. Additionally, unlike the aforementioned Elven warriors, they don't require a pledge to Gondor to hire. 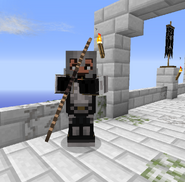 A Gondor Archer, ready for combat 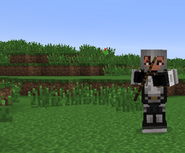 The appearance of Gondor Archers before B21