The Lord of the Rings Minecraft Mod Wiki
Register
Don't have an account?
Sign In
Advertisement
in: Renewed feature, Bricks, Gondor,
and 2 more
English

All variants of Gondor brick

Gondor brick is a stone brick block which can be crafted from Gondor rock.

In Gondor, Gondor bricks are a readily available building material. They can be crafted, and they can also be found naturally as the main structural component of towers, fortresses, and many other Gondorian structures.

There are also mossy and cracked variants of Gondor bricks which can be found in most of the Gondor structures, as well as a carved variant found in ruins.

If you put four Gondor bricks in a square on a Gondorian crafting table, you will be able to craft one carved brick.

If you use Númenórean bricks instead of Gondor bricks (on either a Gondorian crafting table or Dol Amroth crafting table) you can craft one carved black Gondor brick. This black variant was added in Public Beta 26.

If you smelt Gondor bricks in any type of forge or grind it with a millstone, you'll get a cracked variant out of it. You can then craft walls, slabs, and stairs out of it. This was included into the mod in Public Beta 25.

As of Public Beta 25 Gondor bricks can also be overgrown by vines (the block itself was earlier in the game, but could not be crafted). Just put one vine and the brick on a Gondorian crafting table.

Public Beta 27 saw the addition of the gulduril variants. Only the bricks (white, mossy or cracked) can be put into the world and then "spiced" (right-clicked) with gulduril to create a Gulduril brick. It will appear to be enveloped in a shimmering green veil. These blocks can be used to make Morgul portals. After creation, you can harvest the blocks with a silk-touch pickaxe. A normal pickaxe will only yield the original block. Gulduril bricks cannot be crafted.

Before Update 34, the Númenórean brick and its variants were called "black Gondor bricks". 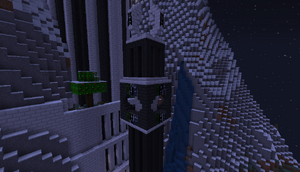 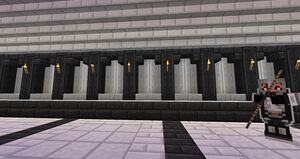 White Gulduril bricks look quite unusal compared to the black ones (pre-Update 34). 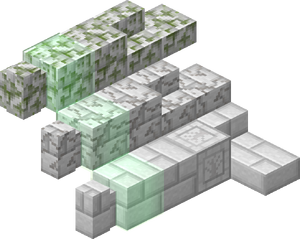 All of the products white gondor brick can be made of.
日本語
Community content is available under CC-BY-SA unless otherwise noted.
Advertisement