The Lord of the Rings Minecraft Mod Wiki
Register
Don't have an account?
Sign In
Advertisement
in: Structures, Gondor, Good,
and 3 more

Gondor obelisks are tall decorative monuments that spawn randomly throughout Gondor, Enedwaith, Tolfalas, Ithilien, and Ithilien wasteland. They can also be found in Gondorian towns.

They are four levels high, with each level smaller than the next. They are made of various types of white bricks, except for second level, which is made of Gondor rocks. The fourth level is topped with a beacon of Gondor. 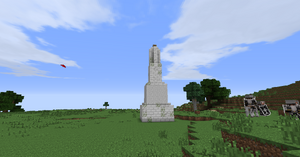 An obelisk in the fields of Gondor.
Community content is available under CC-BY-SA unless otherwise noted.
Advertisement