Gondor Ruins are structures found in and around the Gondor biome (the large variants are also found in Enedwaith), formed by piles of many of the different Gondor blocks (mostly Gondor bricks, some of which are mossy and cracked ones). They are remnants of the ancient splendour of the lands of Gondor.

In the smaller versions of the Gondor ruins, there will sometimes be a carved Gondor brick set into the ground. By breaking that block, you can access a ladder that brings you down under the ruins.

Break the two outer slabs of Gondor rock (in the picture moved to the back) to reveal two hidden chests, a normal and a stone chest. The normal one, only contains bones and skeleton skulls, while the stone one contains more valuable items such as silver coins, pouches, weapons, or silver and gold ingots, etc. Beware, however, because when the player tries to open the stone chest, a wraith will appear. 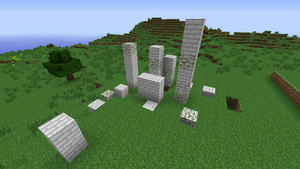 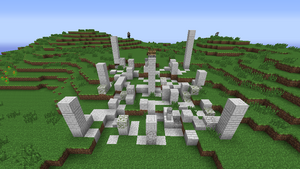