The Lord of the Rings Minecraft Mod Wiki
Register
Don't have an account?
Sign In
Advertisement
in: Gondor, Structures, Good,
and 5 more

A Gondor watchfort is a generated structure that spawns in the mighty land of Gondor. It is an uncommon structure, although it is slightly more common than a settlement. Gondor watchforts are very useful for players wishing to hire soldiers, because of the captain located within.

These watchforts make excellent bases for a player because of their spacious interior and large amounts of powerful NPC's.

Each watchfort spawns with ten soldiers of the respective fiefdom, one or two tower guards and one captain of the appropriate fiefdom.

Even though the captain gives a large alignment bonus when slain, it is not recommended for evil aligned players to search for fortresses to find the captains -- they are usually located deep within Gondor, and are well-guarded by many strong soldiers.

Each of the seven Gondorian fiefdoms has its own watchfort variant. They all have the same shape, but differ in the blocks they consist of and the NPCs that inhabit them. The banners on the structure also vary in correspondence to the fiefdom.

Dol Amroth watchforts consist of Dol Amroth brick, decorated with blue tiling on the roof and other prominent points. Men-at-arms, archers, and elite knights guard the fort. Finally, at the top of the fort, a captain can be found, from which allied players can hire the footmen and knights of Dol Amroth.

Pelargir watchforts are recognizable from other fiefdom variants by their white sandstone roofing and black Gondor brick highlights. They are garrisoned by marines. In addition, a commander can be found on the top level, from which substantially allied players can hire troops.

Lossarnach watchforts are found in Lossarnach. They use a combination of Gondor bricks and cobblebricks in their architecture. They also have wooden roofs and beams of varying wood types. They are guarded by the fierce and hardy axemen. Also, a captain is to be found on the top level, from which allied players can hire troops.

Lebennin watchforts are found in the fair lands of Lebennin. They largely consist of Gondor bricks, with stone supports and roofing. They are occupied and guarded by several levymen. A levymaster spawns on the top level, from which players with high standings with Gondor can hire troops.

Pinnath Gelin watchforts are found in the country of Pinnath Gelin. They are comprised mainly of cobblebrick, with a roofing of green tiles. They are manned by soldiers. A captain can be found on the top level, from which players with sufficient allegiance with Gondor can hire troops.

Blackroot Vale watchforts are found in the lands of the Blackroot Vale. They bear a strong resemblance to the regular watchfort design, however are comprised mainly of cobblebrick, as opposed to Gondor brick. They are fiercely guarded by soldiers and bowmen. A bowlord is located on the top level, from which players with sufficient standings with Gondor can hire troops.

Note: This article uses the British convention of floor naming.

While the exact bricks used in each structure vary, all fortresses are built to the same basic design.

Prior to Update 35 this floor contained the only chest with loot in the whole structure. This update replaced it by a Table of Command.

The second floor is the floor that allows you to connect between the Beacon of Gondor and the remainder of the fortress via the Gondor rock bridge. Direct access to this floor is also possible via the ladder on the right side of the fortress.

The captain spawns on this floor, although he sometimes wanders around the inside of the structure a bit. It is here that you are able to hire troops of Gondor.

A Gondor watchfort can be used as a base by players aligned with Gondor. There is plenty of room to put storage chests, and from the top, the player will have a good view of the terrain around their base, and will be able to see enemies approaching from a large distance. Most importantly, using a Gondor watchfort as a base will give the player quick access to the captain, from which they can hire troops. 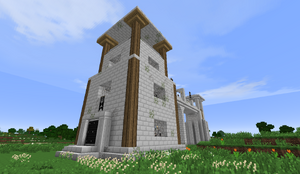 A watchfort as seen in Beta 27.

An example of the loot that can be found in the chest of a watchfort. 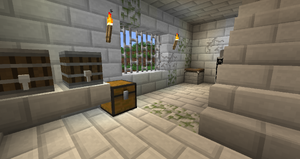 The barrels of ale and Gondorian crafting table that are found downstairs. 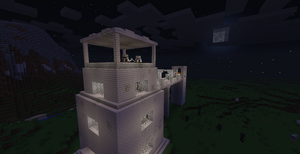 The old appearance of the watchfort. 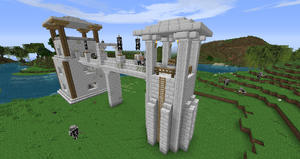 The back of a watchfort. 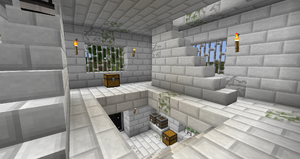 The first floor of a watchfort, featuring the loot chest. 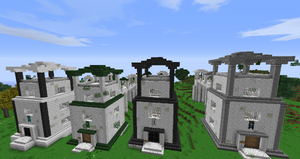 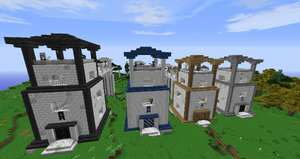