The Grey Wanderer, also known as Gandalf the Grey, is an NPC that spawns when the player enters the realm of Middle-earth for the first time, whether this be through the ring portal or when setting the world type to Middle-earth. He is the third major character currently in the mod, after Gollum, and Saruman, and the fourth major character in the mod's history, although Sauron was removed in Public Beta 11.

As of Update 35, Gandalf will spawn whenever a player first enters Middle-earth. He will also spawn in a pre-Update 35 world if he hasn't spawned for that player before. When he spawns, you'll hear a "plopp" sound and a message will appear in the chatline, something like this:

<Grey Wanderer> I am looking for someone to share in an adventure...

Currently, Gandalf's task in the mod is to provide a small tutorial via a Mini-quest. In this tutorial, he will discuss a number of the mod's core features, including (in this order), the Red Book and mini-quests, the map, alignment, factions, and pouches.

When right-clicked, Gandalf will say the following (or some variation thereof):

Right-clicking on him will give the following screen: 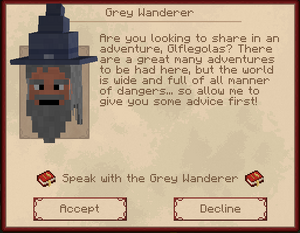 If you decline the quest or ignore him, the quest will be still available (speak to Gandalf again). If you wait for too long, he will despawn and the (potentially half-done) quest will fail. But no fear, he'll visit you again, when you wait for a while or after you restart the game. The only way to get rid of this nuisance is to complete the quest.

After accepting the quest, he will say:

Excellent! Now I have a few odds and ends for you here.

Now, the progress bar will show up in the upper left corner of the screen, telling you, how many parts the tutorial has, and how far you got in the meantime. It also specifies, what to do next, in case you don't get Gandalf's speech correctly:

After talking to Gandalf again, the player will be given the Red Book, along with the words:

This book you shall find particularly useful. Open it up and look inside!

After opening the Red Book, Gandalf tells the player:

The Red Book is a journal of your adventures. All kinds of folk all around Middle-earth will want help with tasks both big and small. They may even reward you for it! 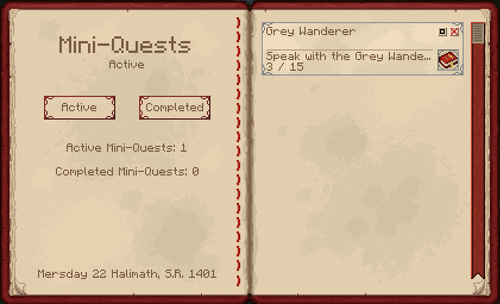 Now you must learn to read a map. For Middle-earth is a very wide world indeed, and any decent adventurer must know how to find their way around.

Pressing "L" will take the player straight to the Middle-earth map, which will look something like this: 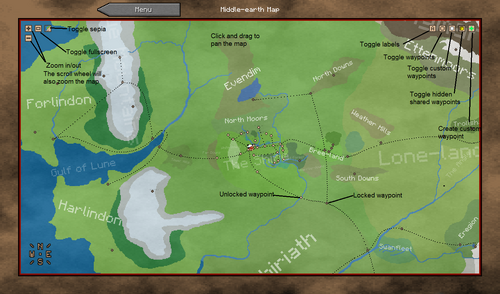 After this, Gandalf will say:

Middle-earth is full of peoples both fair and foul... and, depending on how you conduct yourself, those peoples may count you as a friend, or fear you as an enemy.

Now, your alignment meter shows your standing with the peoples of Middle-earth. You ought to familiarise yourself with it, young player.

After exploring the alignment meter by pressing the left/right and up/down arrow keys (by default), Gandalf will say:

What's next? Ah, yes. The faction guide can tell you more about all those groups... their friends, foes, and areas of influence.

Pressing the L key (by default) will bring up the factions guide, which will look something like this. 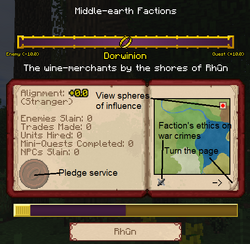 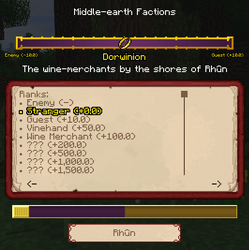 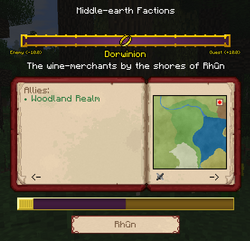 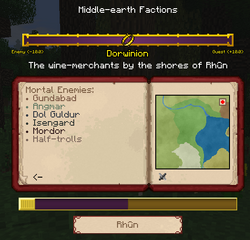 Faction enemies
Add a photo to this gallery

Once that's done, the player should talk to Gandalf again:

Of course, there is much to do in Middle-earth. You will learn more about the world through your adventures.

Hmm... why, I almost forgot! Take these old bags along with you. I suspect you shall have greater need of them than I.

Gandalf will subsequently give the player three small pouches, which most likely will earn you the achievement "Bigger on the Inside". Then he will leave with the words of

Well, I do believe that's all I have to tell you, and now I must be on my way. Good day to you, player! 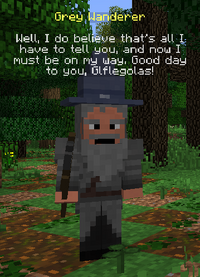 After this, the player has earned the achievement "Looking for an Adventure" and the quest is done. A complete record of the dialog can be looked up in the Red Book (completed quests) now.

Gandalf stays around for a little while, able to chat (see speechbank below). When ignored for a while, he disappears with a "plopp" in a puff of smoke, he'll say in the chatline something such as:

I must see to some other business now. May our paths cross again.

), he is immune to any damage dealt by weapons in survival mode. If attacked, he will fight back using Glamdring, as well as his staff, making him the only NPC that dual wields. However, he only hits with his sword, which deals 6.5 (

) per hit, making him one of the strongest NPC's in the game. Gandalf is also immune to most other forms of damage, including (but not limited to) fire, explosions, potions, suffocation, falling, and drowning, making it impossible to kill him except in creative mode.