Ravagers and defilers of the Mountains

The Orcs of Gundabad have long troubled much of the North of Middle-Earth. These bloodthirsty Orcs are split into many scattered tribes, and at night can be found far from their chief strongholds in the Misty Mountains, and trouble many lands between the Lone-Lands and Wilderland. The average Gundabad Orc may not seem like a challenge, but be careful: hordes of them are lethal, and they are often backed up by powerful and well-equipped Gundabad Uruks.

The Gundabad Orcs are the descendants of a group of Orcs of Melkor that sacked and captured Mount Gundabad not long after the War of the Elves and Sauron in the Second Age. The Orcs of the North had been scattered tribes, living in the Forodwaith and the remnants of the Iron Mountains. However, after his defeat at the hands of the Dwarves, a furious Sauron sent his own Orcs to stir up these tribes to war. They assailed the Misty Mountains throughout much of the latter half of the Second Age, attacking dwarven holds wherever they could be found, and eventually taking for themselves all of the Misty Mountains north of the Gladden River.

These orcs came into conflict with surrounding peoples many times. Their battles with the Dwarves lasted much of the Second Age, and at the start of the Third Age they came into conflict with Elves and the Men of Arnor as well. A band of them slew Isildur, the King of Arnor and son of Elendil the Tall, in the Gladden Fields at the dawn of the Third Age. Their strength had been bolstered by many of the Orcs of Mordor, who had been sent by Sauron before the War of the Last Alliance.Thirteen hundred years into the Third Age, the Witch-Realm of Angmar was formed in the North, and Gundabad became part of that realm. Their great fortress at Mount Gundabad provided passage between the western and eastern portions of the Witch-Realm. The Orcs and great Uruks of Gundabad bolstered the Witch-King's forces, and were present in many battles with the successor states of Arnor.

After the fall of Arthedain and the subsequent destruction of Angmar, many of the Angmar Orcs joined the forces of Gundabad, making it the most powerful faction of Orcs in Middle-Earth, though this was during a time when Orcs were relatively weak. Around this period, the Dwarves unearthed a terrible discovery under Moria: a Balrog of Morgoth. It slew King Durin VI, and was named Durin's Bane. In the twenty-fifth century of the Third Age, under the influence of Sauron, the Mines of Moria were populated with Orcs, which reproduced there and in other parts of the Mountains. The Balrog assumedly allowed those Orcs to inhabit the ancient dwarven stronghold. The orc soldiers built fortresses across the mountains, blocking passes into Eriador. Gundabad Orcs were responsible for many attacks on the travelers during this time, and also trapped a Gondorian army between the Limlight and a Balchoth army in the Battle of Celebrant. Some Orcs, chiefly those from Mount Gram and nearby holds, began to raid Eriador, fighting the Dunedain of the North, with one band reaching even to the Shire.

After Azog the Defiler slew the wandering dwarf-king Thror in Moria, Gundabad became embroiled in the War of the Dwarves and Orcs. For seven long years, the Orcs of Gundabad fought armies from all seven Dwarven Clans, and the dwarves eventually sacked all of their fortresses north of the Gladden, though the Dwarves occupied none either out of lack of interest or strength. The war ended with the brutal Battle of Azanulbizar, in which many Gundabad Orcs were slain, and Azog himself was killed by Dain Ironfoot. Many of those Orcs fleeing the defeat escaped to the Ered Nimrais, where they persisted for several years (killing Walda, King of Rohan) before finally being defeated.

Bolg, the son of Azog, took control of Gundabad after his father's death. In the years after the Battle of Azanulbizar the Orcs regrouped and multiplied, and soon became a threat again. Their strength nearly returned to what it had been before the war, and travelers were again waylaid in the passes. Goblin-Town, an old cave system on the High Pass, became a major settlement of these Orcs, and was led by a great chieftain called the Great Goblin.

However, the Great Goblin was killed by Gandalf the Grey in a bid to free Thorin and Company from the Orcs that had captured them, and many others were killed when the Eagles rescued the dwarves. The wrath of Gundabad was once more kindled to fury, and Bolg led out a great army of Gundabad Orcs, Uruks, and Wargs from all the clans of the Misty Mountains to attack and capture the recently reclaimed dwarven city Erebor. They were met in battle by the Wood-Elves of Mirkwood, the Dwarves of the Iron Hills, and the Men of Lake-Town in what was called the Battle of the Five Armies. The Orcs were defeated, Bolg was killed, and three-fourths of the Orcs of the Misty Mountains were slain.

But though they had been defeated, Gundabad was not destroyed. In the years following the Battle of the Five Armies they multiplied once more. Though the Beornings kept the High Pass open, soon their control dwindled, and the mountains became more dangerous than ever before.

In TA 2989, a group of dwarves led by Balin, son of Fundin reclaimed vital parts of Moria in an attempt to rebuild their ancient kindom. But five years later, the Moria Orcs counterattacked and killed every dwarf in Moria. With reinforcements from Mordor and Dol Guldur being sent to Moria on a constant basis, the Moria Orcs grew stronger and well-equipped. At this point Sauron's realm in Mordor had begun to grow once more, and the Orcs grew bolder and stronger again.

Now, the scattered clans of Gundabad go to war once again, and have begun to raid the lands of their enemies around them. Though they have no one captain, they are united by a single cause: the destruction of their enemies. From the fields of the Bear-men to the filthy woods of the cruel Elves, the Orcs come to burn and kill.

Gundabad is allied with all of the primary Orc factions except Isengard, and is enemies with all of the Free Peoples. Their area of influence contains most of the regions around the Misty Mountains and Angmar, especially around Mount Gundabad, Goblin-Town, and Moria. 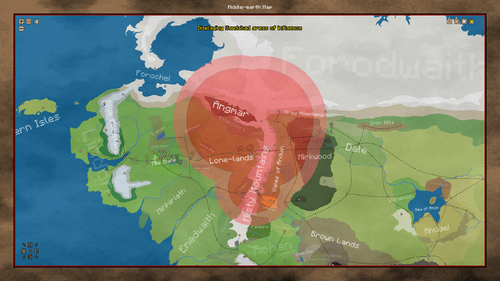 Gundabad invasions come in two forms: Normal invasions, featuring all types of Gundabad soldiers, and Warg invasions, which are restricted to Gundabad Wargs and Warg-riders. They both occur commonly in the Ettenmoors and Lone-lands, uncommonly in the Blue Mountains, Coldfells, Eriador, the Gladden Fields, the Iron Hills, Lindon, Minhiriath, and the Trollshaws, and rarely in Breeland, Dale, Dunland, Enedwaith, Eregion, the Field of Celebrant, the Grey Mountains, the Lothlórien Edge, Midgewater, Swanfleet, the Vales of Anduin, and Wilderland.

The Orcs of Gundabad may be scattered and leaderless, but they all share one vile trait: their hatred for the Free Peoples of Middle-Earth.

The Orcs of Gundabad build few permanent structures, and often use abandoned or conquered fortresses as their own.