The Lord of the Rings Minecraft Mod Wiki
Register
Don't have an account?
Sign In
Advertisement
in: New Image Needed, Near Harad, Structures,
and 3 more

Harad Pyramids are massive, pyramidal structures that can be found in the Great Desert of Near Harad. They are made of Haradric Brick, which has been worn away over the years by the harsh conditions of the desert. The pyramid is topped with a small walled-off flat space made of red Haradric Brick, red sand, and red sandstone. At the center of this flat section is a small obelisk, which is topped with the symbol of the Eye of Sauron. A gold block is inset as the Eye's pupil.

Each pyramid features a single entrance at the base, usually partially buried with sand. Once the sand is cleared away, players can explore an internal network of catacombs full of treasure, which is guarded by desert scorpions and wraiths.

These monuments were built early in the Second Age by the ancient Southrons, the ancestors of the Coastlings and the Gulfings. Much like the Taurethrim Pyramids in the Forests of the South, these pyramids were built both to entomb ancient rulers and their riches and to honor the Lord Sauron. They have been abandoned for thousands of years.

The interior labyrinths of these pyramids can be tricky to navigate, as the corridors are filled with sand and some chambers are hidden. This section will refer to the floor plan on the left, which has numbered the various chambers and highlighted the locations of chests in green.

The entrance to the pyramid (1) is usually hidden somewhat by sand. It features a sloped passage leading beneath the surface of the pyramid, which levels out into a long corridor. Near the end of the corridor are a pair of store-rooms (2), beyond which the corridor branches off in two directions.

After the store-rooms, the corridor forks and loops around a set of three tombs (3). On the far side of the tombs, the corridor will be blocked on either end by a wall of bronze bars (4). The room beyond is the main vault (5), which is usually swarming with scorpions due to the spawner it contains.

The pyramid also features three hidden chambers, which archaeologists will have to dig through the pyramid to reach. One can be reached by breaking through the top of the pyramid (not shown on floor plan), while the other two are located towards the left and right (6) of the main entrance hallway, three blocks above its level. Each is swarming with scorpions.

Beware - every chest inside the pyramid has the chance to spawn a Harad Pyramid Wraith in a lightning bolt when a player attempts to access it, along with some scorpions. Those foolish to try looting these pyramids unarmed are in for a nasty surprise.

These small, simple rooms are the first chambers that looters will happen upon after clearing out the main corridor. Each room is small, and contains three stone chests with loot. There are no scorpions in these rooms to guard the treasure, but they will occasionally spawn with wraiths to attack would-be looters. These chambers were likely made to contain offerings to the dead entombed within, or to the Lord Sauron.

At the heart of each pyramid is a set of three tombs, with vaulted ceilings and burial slabs inset into the floor. Beneath the slabs can be found a stone chest and a block of waste, no doubt the remains of ancient Southron lords. Trying to loot the chest will usually invoke the wrath of the wraith whose corpse is entombed here.

At the far end of the pyramid, kept free of sand by walls of bronze bars, is the main vault, where the greatest treasures of the pyramid lie in wait. These rooms are protected by scorpions, whose numbers are constantly replenished by a spawner inside the vault, placed atop a plinth of red brick. The vault is more ornate than the rest of the pyramid, featuring many pillars and open flames in the corner, which provide light. Beneath the plinth is hidden an Ancient Haradric Chest, an ornate sandstone chest filled with gold and gems, which contains the pyramid's best loot. A wraith always spawns when players try to loot this chest.

Three hidden treasure chambers can be found in these pyramids. They are usually filled with scorpions, as a scorpion spawner always spawns beneath the chamber's central stone chest, which is the only feature of the room. When accessed, this chest will summon a wraith and scorpions to fend off looters.

The many chests of Harad Pyramids can contain some extremely valuable loot, much like Ancient Harad Fortresses. Alongside the sad remains of former inhabitants, these chests can contain precious metals, gems, lapis lazuli, rings, Haradric or Umbaric Equipment, and Coast Southron or Gulfing armour. Perhaps most importantly, uncraftable Black Númenórean Armour and equipment can be found in these baskets, as with similarly uncraftable Old-Haradric Sacrificial Daggers. Lucky players might even find mithril nuggets in these fortresses. 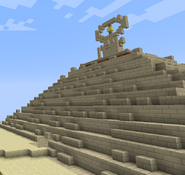 The pyramid from the outside. 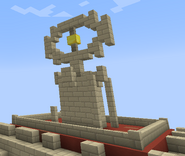 The eye at the top of the pyramid. 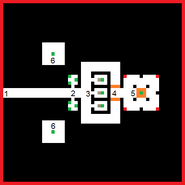 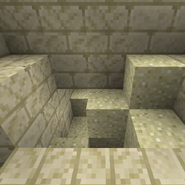 Hard to spot: The entrance (1) to the pyramid. 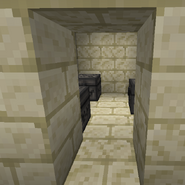 One of the first two treasure rooms (2). 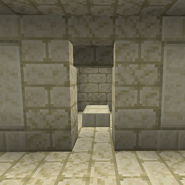 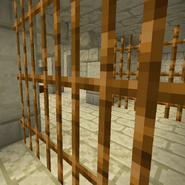 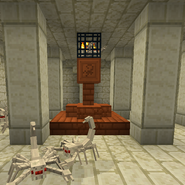 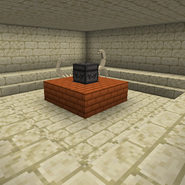