Haradric bricks are made with four white or red sandstone on a Haradric crafting table. Once the bricks have been obtained, they can be used to create - white or red - slabs, walls, stairs and carved bricks using the regular recipes with the same crafting table. 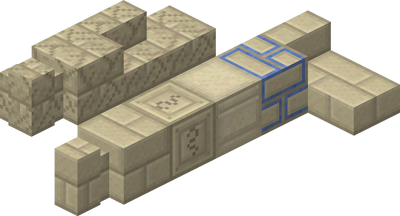 A lapis-trimmed variant (only from white brick) can also be obtained as of the Public Beta 26.

To make the cracked variant, first craft regular bricks - white or red - (see above). Then smelt them in a furnace or any type of forge. The cracked slabs, stairs, and walls can now be made on a Haradric crafting table, using the normal Minecraft recipes.

Retrieved from "https://lotrminecraftmod.fandom.com/wiki/Haradric_Brick?oldid=504140"
Community content is available under CC-BY-SA unless otherwise noted.