The Lord of the Rings Minecraft Mod Wiki
Register
Don't have an account?
Sign In
Advertisement
in: Renewed feature, Blocks

Hearth blocks are blocks which can be crafted or found in various structures containing fireplaces, such as taverns, mead halls, houses, as well as on the top of obelisks.

This block shares the properties of netherrack in that a fire lit on one will never burn out, making them a useful and easily obtainable alternative for creating fireplaces while in Middle-earth. In renewed they also have an animated texture when they are lit, as seen in the infobox.

The recipe for three hearth blocks requires three coal (normal or charcoal) and three bricks on a vanilla crafting table. In renewed this recipe only yields one hearth block.

Apart from decoration, hearth blocks in renewed can also be used as the only way to produce Soul Fire in Middle-earth (though with a scientific explanation). To do this, simply throw some Blue Vitriol onto a lit hearth block and the flames will turn blue (as shown to the left). 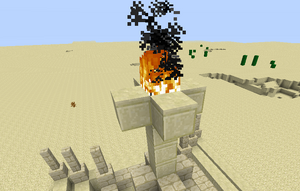 Hearth block on top of an obelisk. 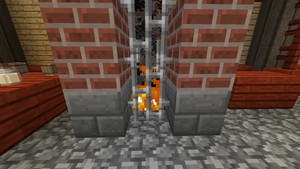 Hearth blocks in the fireplace of a tavern. 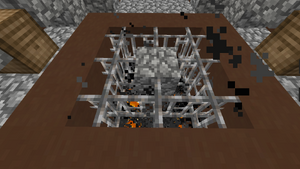 Hearth blocks in the fire pit of a house.
Community content is available under CC-BY-SA unless otherwise noted.
Advertisement