High Elven torches are a source of illumination for the High Elves of Lindon and Rivendell. They light up the same amount of space as a normal torch, but emit an aesthetically pleasing soft blue glow.

A High Elven torch will break instantly and drop itself when broken using anything. The tool will not take any damage when breaking the torch.

High Elven torches will also be broken if flowing water runs over its location.

Torches can be found randomly among the supports in halls. Torches can also be found in smithies, and each levels of towers.

The High Elven torch must be crafted on a Lindon crafting table and Rivendell crafting table. The recipe requires an Edhelmir atop of any stick.

From Public Beta 32, Torches can be purchased from Rivendell Wanderer. It is a good way to obtain the High Elven torch because they are not very expensive and players can save their valuable Edhelmir. 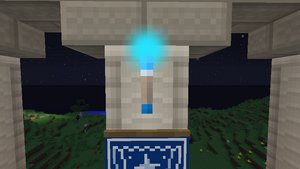 A High Elven torch in a High Elven hall.
Add a photo to this gallery
Retrieved from "https://lotrminecraftmod.fandom.com/wiki/High_Elven_Torch?oldid=597580"
Community content is available under CC-BY-SA unless otherwise noted.