The Lord of the Rings Minecraft Mod Wiki
Register
Don't have an account?
Sign In
Advertisement
in: Structures, Elves, Eriador and Surroundings,
and 3 more

The High Elven turret is a small tower made of mostly brick. Currently it does not spawn naturally in the world, though the ruined variant can be found in Eregion. The normal turret can however, be spawned in creative Mode using a structure spawner, which is how the image on the right was taken. Both types of turrets currently only seem to be used for decoration, as neither contain any loot.

The interior of a normal High Elven turret contains a floor checkered with High Elven pillar and stone slab blocks. Four pillars can be found in the corners supporting the structure. Two long ladders along the back wall lead up to the battlements. The entire structure is lit up with regular torches.

The ruined variant of the turret is the only type that can be found spawning naturally in Middle-earth, and even then, they will only spawn in the Eregion biome. This variant of the turret looks much like the normal turret, but in a state of disrepair. Many blocks are cracked or mossy, and some blocks are missing. The ladders and torches are also gone. 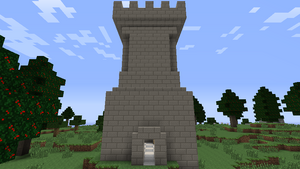 The normal turret can not be found. 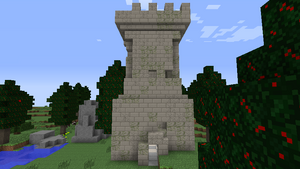 A ruined turret found in Eregion. 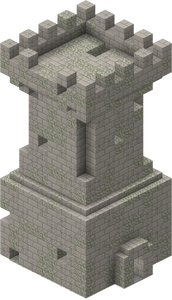 A ruined turret.
Community content is available under CC-BY-SA unless otherwise noted.
Advertisement