The Hill-troll chieftain is a boss troll mob for good-aligned players to fight. He is about four meters high, with two heads, and is a stronger version of the normal Hill-troll, with many new and enhanced abilities following the boss mechanics.

Successfully defeating the Hill-troll chieftain will not only earn you a lot of alignment and loot, but also a shield, and corresponding title. It will also earn you the achievement Long Live the Chieftain.

In certain parts of Middle-earth, troll totem pieces can be found. These can be found as rare drops from killing Hill-trolls, and in hoard chests in the Ettenmoors.

There are three parts to the totem: the head, body, and base. When these are all placed on top of each other, at night, the mouth of the statue will open. As of Beta 31, the statue must have a view of the sky in order to activate. This can, however, be just one block wide, if you prefer to fight underground.

When right-clicked with any type of bone, the totem will promptly disappear, and the chieftain will rise from the ground. It is then up to the player to defeat it with the help of any hired units they may be commanding.

Please note: You must have negative Angmar alignment to do this!

Like normal Hill-trolls the chieftain will crumble into stone in sunlight. If you are fighting the boss in a biome where the sun shines (e.g. not Angmar or Mordor) then you have until sunrise to defeat it - or else the boss will disappear and you will not gain any rewards. You also lose those troll totems you worked hard for.

Tip: You can summon the chieftain at night or in dark caves.

While troops do not inflict much damage on the Chieftain, they are also not a bad idea since they can deal with the trolls spawned and summoned by the Chieftain. Also, if the Chieftain does manage to jump to deal massive damage to you, attempt to shoot him while in the air and it will prevent the damage from happening.

P.S. A slightly cheaty method involves spawning the Chieftan on a reasonably deep sea (about 20 blocks is good) and using a knockback bow on a boat. Keep firing arrows at the Chieftan as you advance on him on the boat, and whenever it spawns trolls to heal himself, it will take them too long to swim up to the surface, and you'll have pushed the Chieftan far enough back so it's out of range of the healing.

An unarmored player can accomplish this, so it may be considered an exploit at the same level as trapping the wither in bedrock. But it is an excellent way of farming Gondolinian gear.

Recommended gear for this tactic:

- Elven bow for speed and damage with striking modifier (+2 kockback)

-Doors for air when you go to collect loot underwater

Defeating the chieftain earns the achievement Long Live the Chieftain. This in turn unlocks the Trollslayer's Shield (before Public Beta 20 the cape) and title Master Trollslayer. You also gain/lose 50 alignment with the respective factions (as if you had killed normal trolls).

The chieftain drops an exclusive skull trophy, and has a 50% chance of dropping either the sword or one or more pieces of armour. He can also drop several random items normally dropped by trolls or found in hoards.

Gondolinian armour on an armour stand. 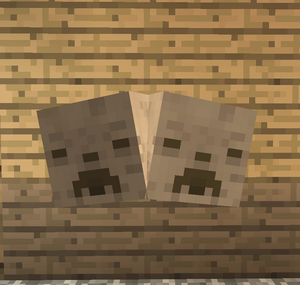 Skull of a chieftain mounted on a wall.

The Trollslayer shield.
Add a photo to this gallery
Retrieved from "https://lotrminecraftmod.fandom.com/wiki/Hill-troll_Chieftain?oldid=635532"
Community content is available under CC-BY-SA unless otherwise noted.
FandomShop Newsletter Paramount+