The Lord of the Rings Minecraft Mod Wiki
Register
Don't have an account?
Sign In
Advertisement
in: Renewed feature, Blocks, Hobbits,
and 3 more

Edit
This feature is present in: Renewed, Legacy.

Hobbit ovens are blocks found in Hobbit holes and in taverns. They resemble vanilla furnaces, but are made out of brick instead of cobblestone. They are used in a similar way, except they have a total of nine slots and can only be used to cook food and dry pipe-weed leaves.

In the renewed version only, oven recipes can be configured using datapacks, and they cook at half the speed of their 1.7.10 equivalents. They also emit smoke particles through the hole in their top. The hobbit oven has also been redesigned to work more like the mod's forges, with two rows of four slots each, allowing gammon to be cooked by combining pork with salt.

Hobbit ovens spawn naturally in Hobbit holes, Hobbit windmills, Hobbit taverns and Hobbit farms. They can be crafted on a Hobbit crafting table using 8 brick blocks in an "O" shape. They can also be purchased from Hobbit Bartenders for approximately 20 silver coins.

As mentioned above, Hobbit ovens function similarly to a normal vanilla furnace. But there are a few important differences: Firstly, since they do not reach temperatures as high as those of other forges, they can only be used to cook food items. They are operate at half the speed of vanilla furnaces, with each cooking operation lasting 20 seconds. This means you can only cook four items (per slot) instead of eight with a single piece of coal.

Despite these drawbacks, Hobbit ovens are well worth using, as instead of a single input slot, they have nine, allowing you to cook so many food items simultaneously. This means that in spite of the longer cooking duration and therefore lower fuel efficiency for a single item, when using the ovens to cook multiple items your food will be cooked much faster and more efficiently. So if you fill each slot with four pieces of food (not eight, see above), you can cook 4 * 9 = 36 in a Hobbit oven, compared to 8 * 1 = 8 in a normal furnace with a single piece of coal. 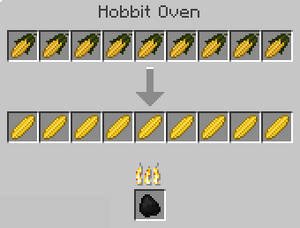 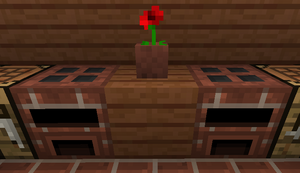