The Iron Hills Merchant is a type of Dwarf from the Iron Hills. They are travelling traders just like the Galadhrim wanderer, and will trade with any player who does not have a negative Durin's folk alignment.

Upon trading with a Iron Hills merchant, the player gains the achievement "Dwarven Treasures".

Iron Hills merchants are similar to the other travelling traders in that they will spawn in various biomes across Middle-Earth, with the exception of their homeland (in this case the Iron Hills), evil-infested biomes (i.e. Mordor), and desolated biomes (i.e. Dagorlad). They will only stay for one Minecraft day, however, so players should make finding them a top priority when they arrive, especially since encountering one of these merchants is even rarer than encountering the Galadhrim wanderer.

Like the other two good-aligned travelling traders, the Iron Hills merchant spawns with a group of normal dwarves around them.

These merchants offer all sorts of food (including the uncraftable Cram), Glowstone, Dwarven ale, Dwarven armour (including trimmed variants) equipment, and even the rare Dwarfwort plant. They will buy food, ingots, and coal from the player. Below is an example of a merchant's trading panel: 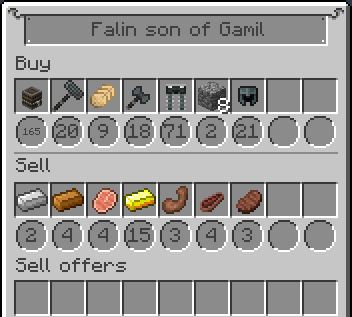 Below is a table of values for each item that the player can purchase from this NPC. Use this table to find out if your merchant is giving you a good deal or not. Please note that the values in the below tables are of the average prices in Silver Coins only and players may encounter merchants with better or worse deals. Each Iron Hills merchant will not have every item listed for sale.

(Note: Table values are general guides only; some traders many have higher or lower prices.)

Below is a table of values for each item that the player can sell to this NPC. Use this table to earn more money by only selling when the prices are high. Please note that the values in the below tables are of the average prices in Silver Coins only and players may encounter merchants with better or worse deals. You will not be able to sell every item to every merchant as each individual Iron Hills merchant will not want to purchase every item listed below.